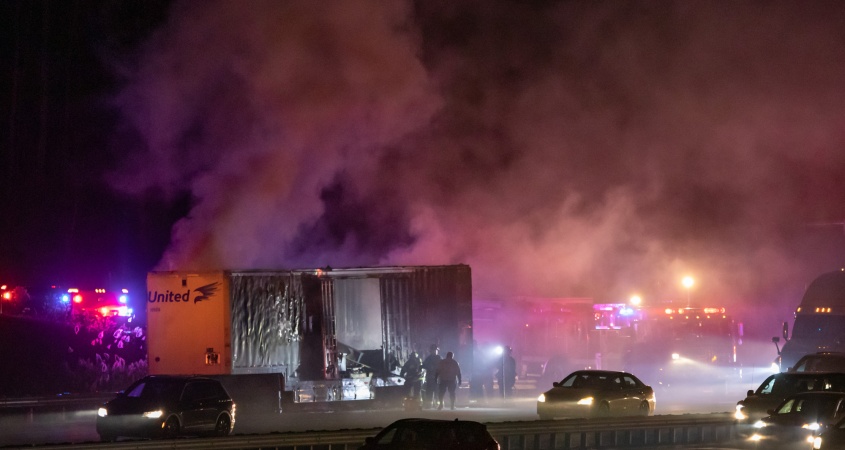 No further information was available, firefighters were still on scene at time of this report.

Earlier this week, Sergeant Burek and members from the Central Lab teamed up with the Sunshine Foundation Mercer County Chapter to donate Thanksgiving baskets to some much-deserving families.

The Sunshine Foundation’s mission is to answer the dreams of chronically ill, seriously ill, physically challenged and abused children ages 3 to 18, whose families cannot fulfill their requests due to financial strain that the child’s illness may cause.

Sgt. Burek has been a part of this organization for many years—not always from the helping side—but as a recipient of foundation’s genorosity.

At the age of 18 months, Sgt. Burek’s sister was diagnosed with Wilms Tumor in her left kidney. As a family of five with a sick child, his family struggled emotionally and financially. The Sunshine Foundation contacted his family and granted them a trip to their Dream Village in Florida and tickets to Disney World for a week. This trip gave his family the opportunity to have some fun and get away from the daily trips to St. Christopher’s hospital in Philadelphia.

His sister ended up beating cancer, however her kidney stopped functioning due to chemotherapy. She endured 2 years of dialysis before receiving a kidney transplant at the age of 15. She is now 32 years old and married with a child of her own.

Since 2006, Sgt. Burek has had the opportunity to represent the New Jersey State Police as a chaperon on the Mercer County Chapter Sunshine Foundation’s annual trip to Disney World, which departs from the Mercer County Airport on the first Tuesday in May.

Having been a part of this foundation for so many years and personally understanding the impact a sick child can have on a family, members from the Central Lab teamed up with the Sunshine Foundation’s Mercer County Chapter to provide a little help to deserving families for the Thanksgiving holiday.

The Sunshine Foundation was started in the 1960’s by a Philadelphia police officer named Bill Sample, who was assigned to a local children’s hospital. He encountered critically and terminally ill children and saw firsthand how their families were burdened not only by mounting medical bills, but also by the frustration of not being able to provide their children’s special dream.

For more info on the Sunshine Foundation please visit
https://www.sunshinefoundation.org/

(TRENTON) – Working toward addressing the striking disparities found in New Jersey school discipline statistics, legislation that would create a statewide program aiming to reduce racial disparities in school discipline; improve the socio-emotional and behavioral responses of students through intervention; and decrease recidivism rates among students who violate school district code of conduct advanced in the Assembly Monday.

The bill (A-3519) was approved by the full body, 59-13-2, during an afternoon voting session. It is sponsored by Assembly Democrats Daniel Benson, Angela McKnight and Mila Jasey.

“As school districts seek to adopt restorative justice practices, it is crucial for the state Department of Education to play a role, through this pilot, to develop best practices and provide guidance,” said Benson (D-Mercer Middlesex). “Ultimately, our goal is reduce truancy and violence in schools by ensuring groups that often are disproportionately affected by school discipline, such as racial and religious minorities, victims of school bullying and violence, as well as those living with mental illness, are seen and heard. Implementing restorative justice practices can ensure not only that discipline is more effective, but that the needs of the school community and those affected by the student’s actions are considered in any post discipline remedy.”

The bill directs the Commissioner of Education to establish a three-year “Restorative Justice in Education Pilot Program” to implement restorative justice practices in the public schools. “Restorative justice” is defined as a system of dispute resolution tools that allows all parties of a dispute to be involved in defining the harm and devising remedies while giving the necessary attention to community safety, victims’ needs, and the need for offender accountability.

“How a child’s behavior is addressed at home and in our schools can either nurture or change the course of their future,” said McKnight (D-Hudson). “We raise a child as we want them to go, with the understanding that a mistake does not have to be repeated and it doesn’t have to chart their path in life. Restorative justice programs may be just what we need to change the startling school discipline statistics in New Jersey and create safe, positive school environments for our children and staff.”

The principal of a school selected to participate in the pilot program would be required to limit the number and duration of student expulsions and suspensions to the greatest extent practicable.  The principal must demonstrate a commitment to exhausting other forms of non-exclusionary discipline prior to using out-of-school suspensions or expulsions.  The bill further requires that a school district selected to participate must provide ongoing professional development to teachers and other staff on:

×          The adverse consequences of the exclusion of students from school and their involvement in the juvenile justice system;

The program would be established within 6 months of the bill’s enactment.  Selected by the Commissioner from applications received by willing school districts, five districts in each of the southern, central, and northern regions of the State would participate in the program.  The Commissioner would provide any necessary guidance, support, and training to participating schools.

The bill will now go to the Senate for final legislative review.

(TRENTON) – Ensuring municipalities are able to help quickly inform residents of boil water notices, a bill sponsored by Assembly members Dan Benson, Wayne DeAngelo and Nancy Pinkin requiring boil water notices are given to the mayor and the city clerk within one hour of testing cleared the full Assembly Monday, 74-0. It will now go to the Governor for further review.

“Residents should learn immediately of an issue with their water to take the necessary precautions for their families,” said Benson (D-Mercer, Middlesex). “The first step is supplying that information to municipal leaders to help notify families.”

This legislation (A-2423) responds to a series of issues arising from Trenton Water Works (TWW). In January 2018, the State Department of Environmental Protection (DEP) issued four violations after the failure of a filter went undetected for more than a month. Benson and DeAngelo are sponsors of multiple bills aiming to address the concerns raised over the last year, including failing to promptly notify residents of boil water notices.

“We’ve been working to improve communication and services for water utilities not just in Trenton but throughout the state,” said DeAngelo (D-Mercer, Middlesex). “This another step in protecting public health and ensuring residents know when, and as soon as possible, there is a concern with their drinking water.”

“A municipality has a better chance of protecting their residents from problems if they are aware of the issue immediately,” said Pinkin (D-Middlesex). “This is common sense legislation that will help residents and municipalities stay informed.”

The notice would be in addition to any other notice required by State or federal law and would contain: name of the public water system affected; geographical area affected; date of the occurrence; consumer corrective measures to be taken; and a telephone number where customers may reach an appropriate party. Upon the boil water notice being rescinded, the bill would also require the owner or operator of the public water system to provide notice via both telephone and electronic mail to the affected municipalities. 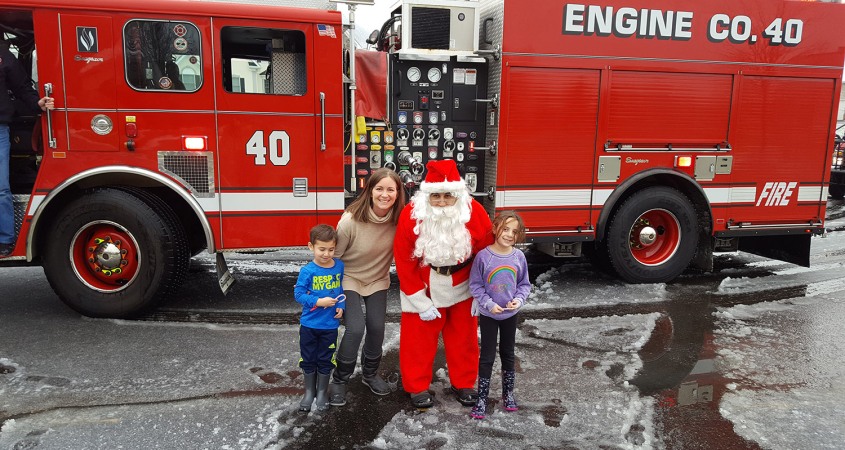 Santa Claus is Coming to Town!!

SEE UPDATED INFORMATION AT THIS LINK AND THE FACEBOOK PAGES BELOW:

Santa will also attempt to make his way to every neighborhood with a schedule reflecting the time/neighborhood.

When posted, the schedule will be a TENTATIVE schedule only and Santa’s arrival times are simply estimates. Santa may arrive slightly earlier or later than listed depending on the duration of prior stops or any emergency calls that we may have to respond to during the event. On the day of the event a “Santa Tracker” will be posted showing his exact location.

The tracker will be posted on this Facebook page and the Robbinsville Professional Firefighters Association – IAFF Local 3786 page.

HAMILTON TOWNSHIP, NJ (MERCER)—On November 25, 2019, Hamilton Police were detailed to Russo’s Music Store at 1989 Arena Drive, on a report of a shoplifting. The pictured suspect was seen via video surveillance inquiring with employees about a guitar then ran from the store with the guitar without paying for it. The suspect fled in the direction of Arena Drive on foot while store employees gave chase. Store employees eventually lost sight of the suspect a short distance from the store.

The suspect is described as a white male wearing a baseball style cap, a gray jacket with a black hood, dark colored pants and light-colored sneakers. The suspect’s baseball cap had a white design on the front.

Hamilton Detectives are asking for the publics’ assistance in identifying the suspect involved in this incident. Anyone with information is asked to contact Detective Joseph Lalacci of the Criminal Investigations Section at (609) 689-5822 or via email: jialacci@hamiltonpd.org The public can also leave a message on the Hamilton Police Crime Tip Hotline (609) 581-4008. 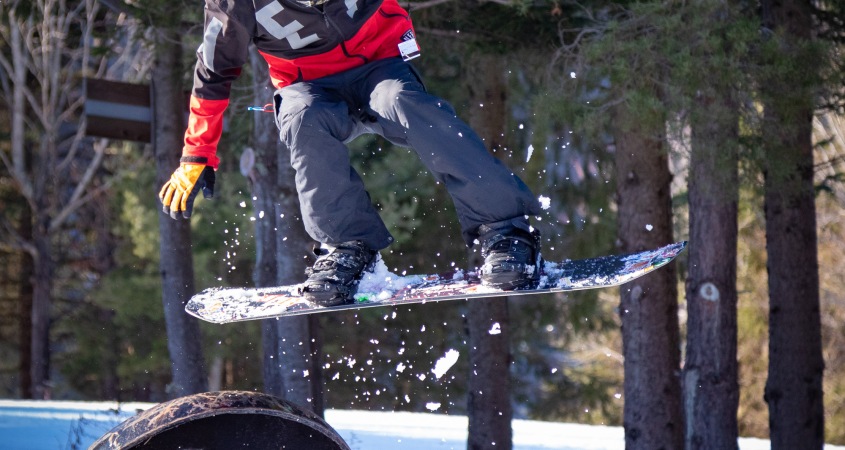 HUNTER, NY–Cold air earlier this month and a recent snowstorm has benefited many east cost resorts for early openings and should provide great conditions for your holiday weekend.

On a Pre-Thanksgiving trip to Hunter Mountain, NY snowplows were finishing pushing snow out of parking lots around the resort. Hunter was open with 3 lifts and 14 trails open with a base of 12″ to 36″ and a 7″ natural snowfall this season so far. During this trip weather was in the 50s and conditions were great with coverage edge to edge on open trails.

Some reports from several north east ski resorts, always check the resort’s website for the current conditions and operating hours prior to heading to the mountains.