ROBBINSVILLE, NJ (MERCER)—The Robbinsville Township Fire Department was dispatched at 5:38 pm to 24 Applegate Drive tonight for a fire alarm activation in a 1+ million square feet warehouse. Upon arrival of the first due fire apparatus the occupants of the building were evacuated, and an active fire was in a rack storage system involving pallets and plastics. Two sprinkler heads of the building’s ESFR* fire sprinkler system were activated and operating holding the fire “in check” but firefighters still needed to stretch 450 feet of hose to reach the fire and extinguish it completely. Firefighters from surrounding departments including Hamilton Township Fire Department and Hope Fire Company of Allentown assisted at the fire. Firefighters remained on scene for the investigation and to overhaul the fire. No injuries were reported.

*An ESFR Sprinkler System stands for Early Suppression Fast Response and releases 2 to 3 times the amount of water compared to a conventional system and commonly used to cover rack storage in warehouses as shown in the one photograph of the interior. 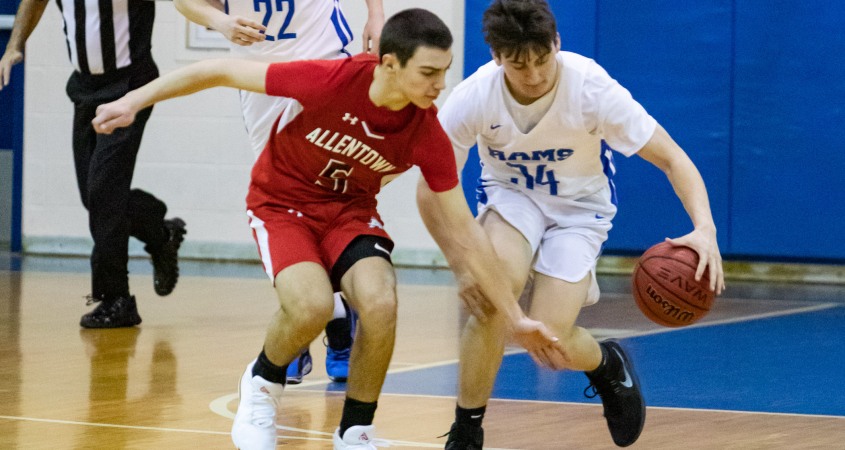 HIGHTSTOWN, NJ (MERCER)–The Hightstown High School boys basketball team came back in the 2nd half to win against Allentown tonight. The final score was 64-59

The New Jersey State Police is seeking the public’s assistance with identifying a second suspect wanted in connection to an aggravated assault investigation in Monmouth County.

On Saturday, December 21, 2019 at 2:53 a.m., two men confronted an Uber driver who pulled over to rest on Phillip Court in Upper Freehold Township. An altercation began and one of the suspects began to kick the driver’s vehicle. While the driver was attempting to drive away, one of the suspects threw a hammer at the vehicle and struck the victim in his face. The driver dialed 9-1-1 and drove himself to the hospital where he was treated for facial injuries.

On Monday, January 6, during the course of an ongoing investigation, detectives located and arrested one of the suspects, Colin Roy, 20, of Allentown, N.J.

Roy was charged with aggravated assault resulting in serious bodily injury, possession of a weapon for an unlawful purpose, terroristic threats, criminal mischief, criminal attempt, and harassment. He was lodged at the Monmouth County Correctional Institution pending a bail detention hearing.

The second suspect is described as a white male and is pictured in the composite sketch below, which was done by a trooper from the New Jersey State Police Forensic Photography and Composite Artist Unit.

Virgil R. Howard, 29, of Ebbtine Lane, pleaded guilty to one count of first-degree aggravated manslaughter before Mercer County Superior Court Judge Thomas M. Brown on January 13.  Under the terms of the plea agreement, the state will recommend that Howard be sentenced to 23 years in state prison under the No Early Release Act.

The guilty plea is a result of an investigation conducted by the Mercer County Homicide Task Force.  On April 8, 2016, at approximately 9:08 p.m., Trenton police responded to the area of 37-49 N. Hermitage Avenue after the ShotSpotter system detected gunshots.  Upon arrival, police found 52-year-old Simon in Boudinot Street suffering from gunshot wounds to the chest.  The victim was transported to Capital Health Regional Medical Center where he was pronounced dead a short time later.

Assistant Prosecutor Kathleen Petrucci, chief of the Homicide Task Force, represented the state.  Howard is scheduled to be sentenced on March 13.