Smith a Cosponsor of the Bill to Protect Older Workers

“With close to 35 percent of the U.S. population over the age of 50, we must act now to stop discrimination and ensure fairness and equal opportunity in the workplace,” said, Rep. Smith.

Smith cited the Association of American Retired Persons (AARP) reports that show 3 in 5 workers see or experience age discrimination on the job, and more than half of older workers are forced out of a job before they intend to retire.

“Discrimination against older workers is real and prevalent despite the fact that more Americans are working harder, contributing more, healthier, and staying longer in the workplace,” said Rep. Smith.

“As a cosponsor of this legislation, I am pleased that HR1230 would restore the burden of proof for age discrimination cases in order to be on par with other forms of workplace discrimination,” he said.

“I am also a cosponsor of an amendment which would require Department of Labor and Equal Employment Opportunity Commission to conduct a comprehensive study on the increased prevalence of age discrimination against older women in the workplace and make recommendations for best practices on combatting age discrimination for women.”

I am committed to ensuring fairness is returned to older workers, and we must fight to ensure age is not a barrier to those with experience, skill, and desire to continue to contribute to our economy,” said Rep. Smith.

Smith called on the Senate to swiftly act on and pass HR1230, where it awaits due consideration.

TRENTON, N.J. – A bill (A5513) sponsored by Assemblyman Ron Dancer that allows taxpayers to make contributions to Meals on Wheels programs in the state through their income tax return forms was signed into law by Gov. Phil Murphy.

“Person-to-person giving is a more beneficial and civically minded form of charity than any government program,” said Dancer (R-Ocean). “We are not a government with communities, but we live in communities that have a government.”

Taxpayers will be able to make voluntary contributions to a state Meals on Wheels fund on their income tax return forms to support local programs in providing meals to homebound seniors.

One in five Americans are aged 60 or older and one in four live alone. Nearly 9.5 million seniors are threatened by hunger. About 16 percent of New Jerseyans are 65 and older.

“Not only does Meals on Wheels help meet the nutritional needs of seniors throughout the state, they support their social well-being and perform wellness checks too,” said Dancer. “Seniors on a limited income, living far away from family or recovering from an illness need our help to live healthy, happy and independent lives. This law will help Meals on Wheels continue to fulfill their very important mission.” 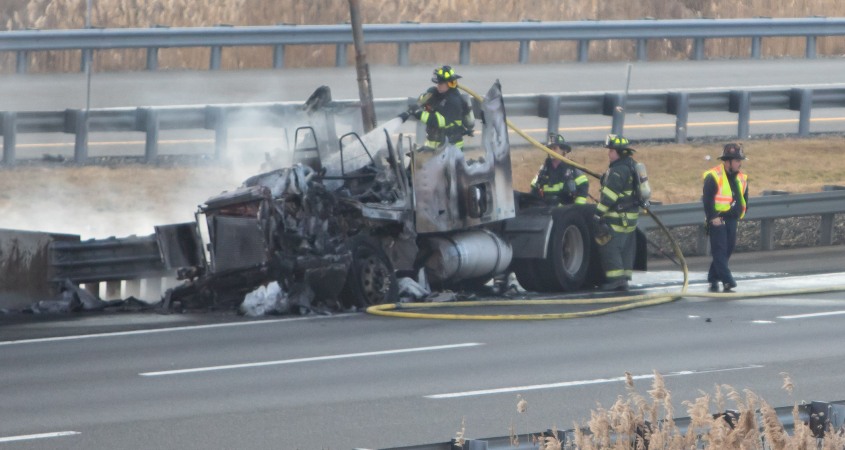 HAMILTON TOWNSHIP, NJ (MERCER)–Robbinsville Township, Bordentown Township and Chesterfield Fire Departments are on scene of a truck fire. The fire is located on the NJ Turnpike North Bound outer lanes also called the “truck lanes” by the Yardville-Allentown Road overpass.

NJ Turnpike north bound outer lanes were temporarily closed until the incident was completed. Traffic was shifted to the inner car lanes. A tanker was called to the scene from Allentown but was turned around once the fire was under control.

Onofri stated that, on Monday evening, January 13, 2020, detectives with the MCNTF initiated surveillance of the investigation’s target, Jeffrey Stewart, as well as his Trenton residence on Morris Avenue.  A motor vehicle stop of Stewart was conducted at the intersection of Bridge and Warren streets and he was taken into custody without incident.  Detectives proceeded to execute the search warrant, and Mercer County Prosecutor’s Sergeant Joe Angarone utilized his K9 partner Bela to conduct a narcotics search.  During the search, detectives located 87 grams of cocaine, 108 bags of heroin, one ounce of marijuana and $1,220 in cash.

Stewart, 54, was charged with second-degree narcotics offenses.  He is being held at the Mercer County Correction Center pending a detention hearing.