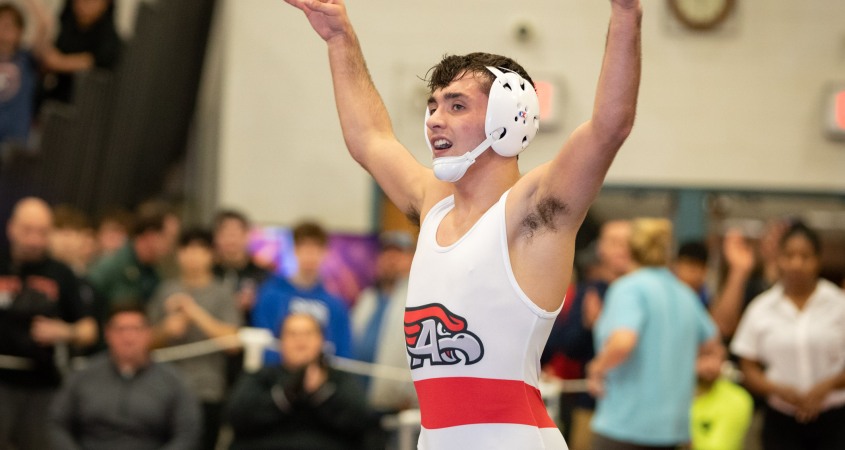 ROBBINSVILLE, NJ (MERCER)—Back in December Joey Lamparelli broke the Allentown High School record for most wrestling wins with 118 wins. Today at the Mercer County Wrestling Tournament Lamparelli broke the CVC-Colonial Valley Conference, Mercer County all-time wins record with 146 wins so far in his career. In the past four years of high school wrestling Joey has only had ten losses in his career, currently sitting at 146-10.  Joey is 30-0 for this season and is a four-time champ of the Mercer County Wrestling Tournament.  Lamparelli is also a two-time Region Champ and three-time district champion and a three-time Atlantic City tournament qualifier.

Joey Lamparelli was also given the Mercer County Tournament Association 2020 Most Outstanding Wrestler Award at the end of the tournament.

When asked how it feels to be the most winningest wrestler in the CVC, Joey said, “It feels surreal, all the hard work I’ve put in over the years shows to have paid off and I couldn’t be happier”

Joey stated that he feels good about the rest of the season and feels good about it. “I’ve been close the last two years but I really feel this year is my year to break thorough.” Joey said.

In preparation for the rest of the season Joey stated he will continue to prep for post season by doing the right things and just continuing to perfect his craft.

Joey says his college decision is between the Coast Guard Academy or Muhlenberg College and would continue to wrestle in college. After the season Joey will still be wrestling at clubs and getting ready to wrestle at the next level.