ED NOTE: IF YOU HAVE A TRUE MEDICAL EMERGENCY CALL 9-1-1 DO NOT DELAY TREATMENT IF SOMETHING DOES NOT FEEL RIGHT. THE EMERGENCY ROOM IS READY FOR YOU AND IS SAFER THAN TAKING A CHANCE THINKING IT WILL GET BETTER ON ITS OWN. CALL 9-1-1 IF YOU FEEL YOU HAVE AN EMERGENCY.

TRENTON, NJ (MERCER)–The New Jersey Department of Health and the New Jersey Hospital Association (NJHA) have produced a joint Public Service Announcement (PSA) targeting residents who may suffer a potential heart attack or stroke and might be reluctant to go to hospital Emergency Departments due to the COVID-19 pandemic.

The PSA, which features Health Commissioner Judith Persichilli and NJHA President and CEO Cathy Bennett, was made following reports that residents may be delaying needed health care that they require because of concerns of hospital safety and capacity amid coronavirus.

Hospitals report anecdotally that inpatient admissions are down anywhere from 20 to 40 percent compared with pre-COVID activity.

“Our hospitals have been safe havens for all who have walked in their doors for over a century,” Health Commissioner Persichilli said in the PSA. “So I urge you, do not delay going to your local emergency room if you are experiencing signs and symptoms of a heart attack or stroke. I can assure you that are hospitals and emergency rooms are safe and waiting – waiting and ready to care for you.”

The PSA, will be promoted through a robust social media campaign and is also available on YouTube at: https://youtu.be/aUDfZnI1WG4.

“Hospitals remain open throughout the COVID-19 emergency, with special precautions in place to protect patients,” said NJHA’s Bennett. “If you are experiencing a health emergency, please don’t delay in going to the ED or calling 911. Hospitals and their healthcare teams continue to care for all patients in a safe environment.”

Residents are reminded that signs of a stroke can include:

Signs of a heart attack can include: 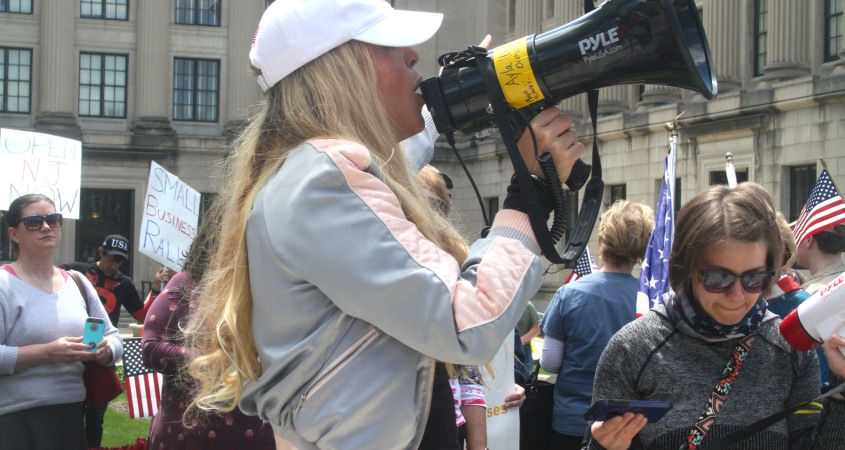 TRENTON, NJ (MERCER)–The largest group of protesters so far, that are against Phil Murphy’s “lock down” and “Stay At Home” Orders gathered today at the NJ State House on West State Street.

The group appeared to call their self “Open New Jersey Now” held signs, marched and chanted from 1 to 4 pm this afternoon. The rally started at the State House and then proceeded to the War Memorial where it continues at this hour via Facebook Live.

Not much is known about the group since many social media posts about public gatherings are taken down or censured. The NJ Attorney General and several police agencies have been known to break up and charge organizers of such events in New Jersey as put out in past press releases.

WEST WINDSOR, PRINCETON, TRENTON, NJ (MERCER) — New Jersey Department of Transportation (NJDOT) and Mercer County officials today announced that Alexander Street/Road in Princeton and West Windsor is scheduled to reopen by the end of next week as the concurrent Mercer County and NJDOT bridge replacement projects near completion.

Mercer County is in the process of competing final paving and striping for its project. Once the County work is completed, NJDOT will have access to the portion of Alexander Road between the Bridge over the D&R Canal and the County Bridge so final paving can be completed on that part of Alexander Road. Once this work is complete, the road will reopen. The NDJOT Bridge over the D&R Canal is complete and the sidewalk opened for pedestrians on May 1.

Note: Story will be updated as we get statements from all parties involved:

“The Supreme Court’s decision speaks for itself, and we are bound by that decision. Beyond that, we have no comment.”

Bill Baroni has served numerous past positions in the 14th District in NJ, Mercer County and Hamilton Township, including: 14th Assembly, 14th Senator, Mercer County Community College Board of Trustees. According to Wikipedia he was the only NJ Republican State Senator to vote for same sex marriage in NJ back in 2010. In February 2010 he was appointed Deputy Executive Director of the Port Authority of NY and NJ by then Governor Chris Christie. In 2012 Baroni co-authored the book Fat Kid Got Fit

JUSTICE KAGAN delivered the opinion of the Court.
For four days in September 2013, traffic ground to a halt
in Fort Lee, New Jersey. The cause was an unannounced
realignment of 12 toll lanes leading to the George Washington Bridge, an entryway into Manhattan administered by
the Port Authority of New York and New Jersey. For decades, three of those access lanes had been reserved during
morning rush hour for commuters coming from the streets
of Fort Lee. But on these four days—with predictable
consequences—only a single lane was set aside. The public
officials who ordered that change claimed they were reducing the number of dedicated lanes to conduct a traffic study.
In fact, they did so for a political reason—to punish the
mayor of Fort Lee for refusing to support the New Jersey
Governor’s reelection bid.
Exposure of their behavior led to the criminal convictions

Full document can be downloaded below:

Opinion of the Court:

“For no reason other than political payback, Baroni and Kelly used deception to reduce Fort Lee’s access lanes to the George Washington Bridge—and thereby jeopardized the safety of the
town’s residents. But not every corrupt act by state or local
officials is a federal crime. Because the scheme here did not
aim to obtain money or property, Baroni and Kelly could not
have violated the federal-program fraud or wire fraud laws.
We therefore reverse the judgment of the Court of Appeals
and remand the case for further proceedings consistent
with this opinion.” It is so ordered.

I am thankful for the Supreme Court of the United States for this clear statement of my innocence.  After years of investigations, indictments, trials, appeals and even prison, today the Court has vindicated me and has made clear that I committed no crime.

I have always said I was an innocent and today, the Supreme Court unanimously agreed.

These have been very difficult years for me, my family and my friends.  There were many tough days, and it was their faith in me and my innocence that allowed me to get through this.

My legal team has been extraordinary.  Mike Levy and the team at Sidley Austin are extraordinary legal professionals, and it was clear the Supreme Court saw one of America’s top lawyers argue my case.  Mike and I have known each other from the first day of law school at the University of Virginia.  He is an amazing lawyer and true friend.

I have been asked do I regret going into prison even thought I have now been vindicated.  I don’t.  My fellow inmates at Loretto prison taught me so much about strength, resilience, and determination.  They kept me going, even on the other side of the jail bars.  And I shall always be there for them.  I hope and pray they are well taken care of in this perilous time of COVID-19.

I want to thank my friends who were always there for me:  coming with me every day to the trial; keeping me upbeat even in dark times and never letting me give up.  You can tell who your friends are when you go through something hard; I am so blessed with great and amazing friends.

And thank you to my friends and family in Ireland.  Many supported me by their visits, their thoughts, their notes, their prayers.  Mile buíochas le mo chairde ar fad in Éirinn.

Today is a long-awaited victory.  But, as we are all living in the time of Coronavirus, my joy in being vindicated is tempered by my concern for the people with whom I served time in prison.  This is a scary time for all of us; it is especially scary for people in prison who can’t self-isolate; can’t socially distance; can’t stay 6 feet apart.  I am going to do all that I can to make sure they are not forgotten.

I have always believed in public service.  And now that the Supreme Court has ruled so clearly,  I can continue my efforts to serve my community.  And I am going to work to help those who are headed to prison, in prison, and getting out of prison.  I have learned much in these past seven years about our criminal justice and prison systems.  And I am going to spend these next years helping those that are caught in them.

“From the day he was arraigned, Bill made clear that the charges against him were false and that he had not committed any crime.  The Supreme Court’s decision today confirms that Bill was right.  Bill is, as he has always said, not guilty.  Although the process of getting to this day has been an ordeal, Bill is heartened that the system ultimately worked, even as he recognizes how often it fails others who are less fortunate.  At long last, Bill looks forward to moving on from this case and continuing his life of service.”