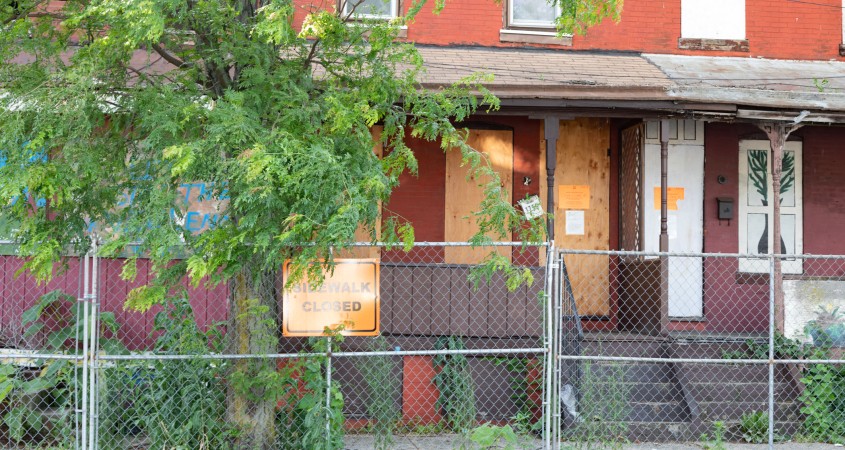 Hamilton Township appears to be trying but “Due to the Governor’s halt on foreclosure actions, this has slowed the process of the Township gaining ownership.“

HAMILTON TOWNSHIP, NJ (MERCER)–At a protest on Thursday June 11, 2020 Black Lives Matter protester Tracey D. Syphax made a statement about the Bromley section of Hamilton and a multi alarm fire 5 years ago.

“I am going to mention one more thing about the Bromley Section of the city. We know that structure racism exists, houses burned down in the Bromley Section almost 5 years ago, those houses are still sitting there, that would happen in no other neighborhood in Hamilton but Bromley. That has to change. That’s racism. That’s separation. That’s underclass and we must speak up against that. We have some action items that we are going to demand Hamilton and Mercer County hold to before this is over.” –Black Lives Matter protester Tracey D. Syphax

MidJersey.News remembers the 6-Alarm fire well and checked with the Hamilton Township Mayor’s Office about the status of the burned and abandoned buildings in the Bromley Section on East State Street in Hamilton.

From MidJersey.News and OnSceneNews records this fire was on or about June 9, 2015 (see video below) and took a ride to East State Street where the fire occurred 5 years ago and confirmed that the buildings are still there abandoned. (see photos below)

After reaching out to the Mayor’s office we recieved this reply:

“Since the start of the year, the Township has started the foreclosure process to gain ownership of the homes so that eventually they can be torn down and new homes can be put up in their place. Due to the Governor’s halt on foreclosure actions, this has slowed the process of the Township gaining ownership.” –Hamilton Township Mayor’s Office

Upon the MidJersey.news investigation the buildings were noticed and posted on April 22, 2019 with an “Unsafe Structure Notice” It appears that Hamilton Township is Trying but is held up by Governor Murphy’s COVID-19 restrictions on foreclosures.

7 minutes 25 seconds in this video you can hear the statement about the fire 5 years ago in the Bromley Section:

Photos and video below by: Brian McCarthy, OnScene News