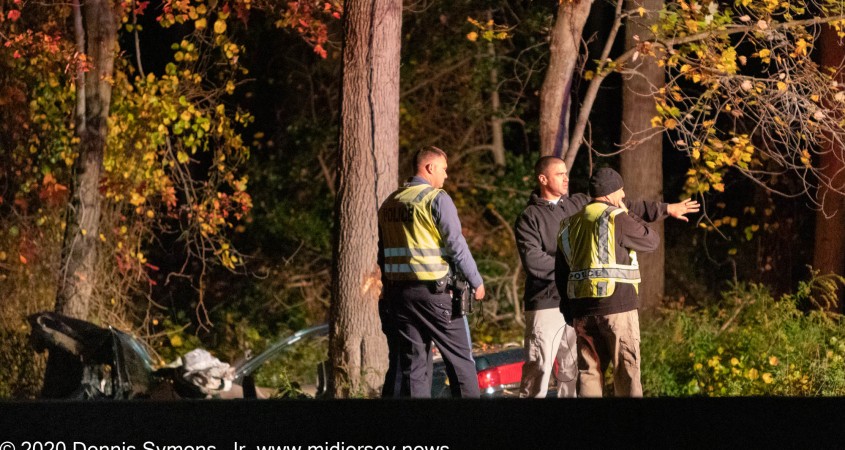 The fire departments performed the extrication, two medical helicopters were called to fly to a landing zone at Hurricane Harbor. The helicopters were canceled due to weather conditions. The vicitms were transported by ground to the Trauma Center at Capital Health Regional Medical Center in Trenton for treatment.

No further information is available at this time and the Jackson Township Police Department is investigating the crash. An e-mail was sent to the department and once public information becomes available about the crash the story will be updated and any corrections made.

At approximately 1920 hours, officers responded to Monmouth Road for a report of a motor vehicle crash involving a single vehicle into the wooded area off of the right side of the road.  Upon officer’s arrival, a 1994 green Mercury Cougar was located off of the road which struck multiple trees. Both occupants were entrapped within the vehicle and needed to be extricated by responding emergency personnel. The occupants were identified as:

Initial investigation revealed that driver one was traveling north bound on Monmouth Road in the right lane when for unknown reasons he left the roadway (right).  Vehicle one continued through the grass area where it struck a tree and was brought to rest. Both occupants were sent via medevac to the hospital as a result of injuries sustained.

At this time, the crash remains under investigation by Officer Lasko #252, Officer S. Cilento #274 and Sergeant Vidalis #251 of the Traffic Safety Unit.

-The media and the public are reminded that any persons arrested or charged with any offenses or crimes are presumed innocent until proven guilty in court.