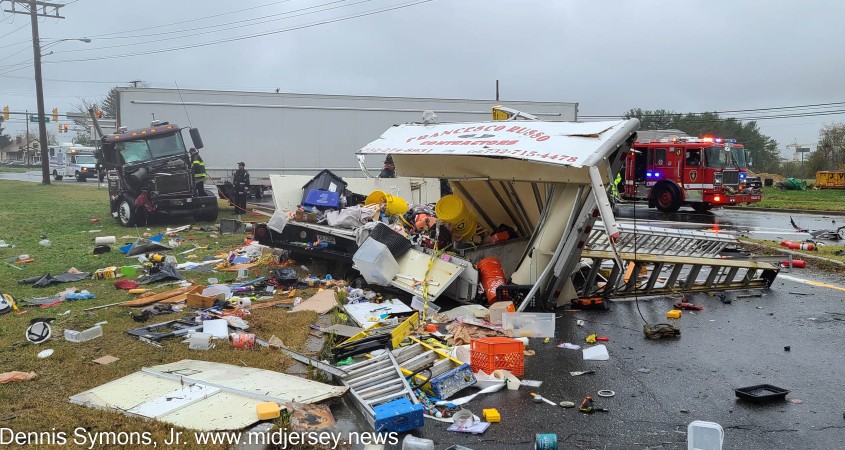 UPDATE AT 5:15 PM INVESTIGATION IS COMPLETE AND VEHCILES REMOVED FROM ROADWAY AND ROADWAY HAS REOPENED

A witness stated, upon arrival civilians stopped to help as they were passing by, employees from Champion Carstar Collision ran over with extinguishers and Police used multiple fire extinguishers to knock down and hold back the fire from the occupant of the construction box van style truck.

When fire apparatus arrived firefighters quickly used a 1 3/4″ line to knock fire down the rest of fire in the engine compartment. Once fire was out the driver of the construction box truck had to be extricated using rescue tools then was turned over to EMS and Paramedics.

An additional rescue was called from Hamilton Township Fire Department, a total of 4 ambulances were called to the scene and two paramedic units.

The Robbinsville Township Police Department has the roadway shut down in the area on the North bound side and is rerouting traffic off of Route 130 in the area. Avoid the area until at least 5 pm this afternoon until the accident investigation is completed.

The Mercer County Prosecutor’s Office Serious Accident Investigation Unit was on their was to the scene at the time of this report and will be assisting the Robbinsville Township Police in the investigation.

This is from preliminary reports, radio reports, witness and on scene reporting. Once official information from the Robbinsville Township Police becomes available the story will be updated and any additions and corrections made if needed.

One thought on “BREAKING: Route 130 Closed By Voelbel For Accident Investigation, Driver Of Box Truck Rescued From Fire And Crash”