TRENTON, NJ (MERCER)–The Mercer County Homicide Task Force responded to the first block of Chase Street in Trenton just before 4 p.m. on Tuesday afternoon for a reported shooting homicide.  Around 3:30 p.m., Trenton police responded to a call regarding a shot male.  Police and ambulance responded and found the victim in the street suffering a gunshot wound.  He was transported to the hospital where he was pronounced dead a short time later.

The victim has been identified as Joel Alexander, 49, of Trenton.  Anyone with information is asked to contact the Mercer County Homicide Task Force at (609) 989-6406.  Information can also be emailed to mchtftips@mercercounty.org.

Sources tell MidJersey.news that the 40th murder of 2020 occurred this afternoon on Chase Street just North of Lansing Alley. Trenton Police and EMS responded to the scene with a man reported shot in the face. Trenton EMS and Capital Health paramedics transported the victim to the Trauma Center at Capital Health Regional Medical Center and a “trauma code” was called en route to the hospital where sources say the man was pronounced dead.

Check back for video when done editing and rendering.

Not in NJ but across the river in Falls Township, Pennsylvania May 24, 2020 Davon Frink, 25, shooting at a Holiday Inn Express at a Trenton party held there.

Trenton Murders Per Year Since 1989

ROBBINSVILLE, NJ (MERCER)–On Tuesday, Robbinsville Township Councilman Dan Schuberth announced via Facebook that he will be resigning his seat and relocate to Washington, D.C. to accept a new position with as the Chief Business Development Officer for the National Association of Wholesaler Distributors.

Mr. Schuberth was elected to his first term on Council in November, 2015, served as President in 2017 and was re-elected to his second, four-year term on November 5, 2019. His current term was due to expire on December 31, 2023. The four remaining members of Council will vote to fill the unexpired term. The candidate must be a resident of Robbinsville and be a registered voter here for at least one year. In the event of a 2-2 tie, Mayor Dave Fried would break the deadlock.

An advocate for those who suffer from from Autism Spectrum Disorder (ASD) and mental illness, Mr. Schuberth volunteers as a Director on the Board of the Mercer County Chapter of the National Alliance on Mental Illness (NAMI Mercer).

Mr. Schuberth has lived in the Town Center section of Robbinsville with his wife, Dr. Natalie Schuberth, since 2010. He is a graduate of Bowdoin College (B.A.) and the University of Pennsylvania (M.S.). He returned to UPenn in the Fall of 2016 to attain a Master’s Degree in Public Administration (M.P.A.) while working full time as Regional Operations Manager for McMaster-Carr, a Robbinsville-based industrial supply company.

“Leaving Robbinsville is one of the most difficult decisions I’ve made in my life,” he said. “When we moved here 10 years ago, Natalie and I decided to go “all in”. We got to know our neighbors, became part of a faith community with Lifetree Community Church, and volunteered our time in the service of others. We’ve met amazing people, supported important causes, and tried to spread joy in a community that welcomed us in with open arms. We are so grateful to everyone that made Robbinsville a place we proudly called our home. Serving on the Township Council for the past five years has been one of the greatest experiences of my life. Mayor Fried and my colleagues on the Township Council are world class public servants and I will miss working with them a great deal. The residents of our community are some of the most caring, engaged, and compassionate people on the planet, and I want to thank each and every person I’ve had the opportunity to work with on issues large and small. You will always have a friend in Washington.” 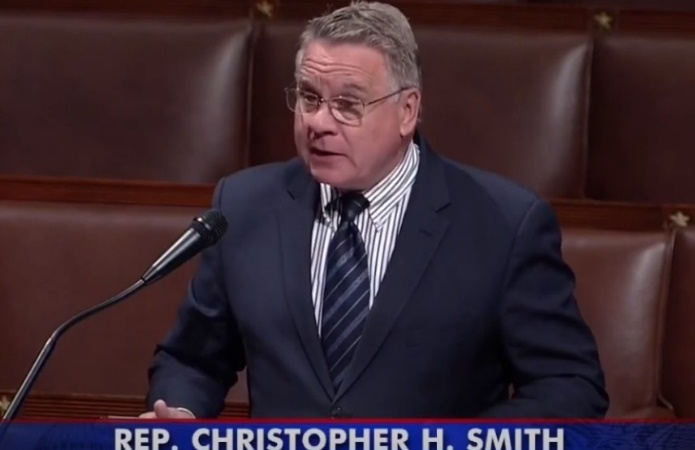 Smith’s bipartisan Accelerating Veterans Recovery Outdoors Act (H.R. 2435),  which was endorsed by more than 120 veteran service organizations, outdoor recreation groups and conservation organizations, will provide increased access to federal lands for the purposes of veterans’ medical recovery therapy. Smith’s bill—cosponsored by 136 bipartisan lawmakers—was included in a package of veterans’ legislation, The Veterans’ COMPACT Act (H.R. 8247), which passed unanimously in the House of Representatives in September and was passed unanimously by the Senate last month. Trump signed the legislation over the weekend.

“Research has shown that outdoor recreation can be an effective form of treatment, rehabilitation and healing for veterans,” said Smith, author of the Veterans Health Programs Improvement Act (P.L. 108-422), and 13 other veterans laws. “While many nonprofit organizations, veteran service organizations and private companies have used the outdoors to help heroes heal, providing greater coordination among key federal agencies will open new opportunities for veterans on public lands and other outdoor spaces,” said Smith, who has twice served as chair of the House Veterans’ Affairs Committee.

The new law will require the Secretary of Veterans Affairs to establish an interagency task force on the use of public lands to provide medical treatment and therapy to veterans through outdoor recreation. After undertaking a comprehensive analysis, the task force will submit recommendations to Congress, within one year, on how to eliminate barriers and provide more public outdoor space for use by our veterans.” Click here to watch Chris Smith’s remarks on the House Floor on Sept. 23.

Jeff Tittel, Director of the New Jersey Sierra Club, said, “Connecting with nature and being in the wilderness is a powerful part of healing, and the Accelerating Veterans Recovery Outdoors Act will help veterans access that power,” and Rob Vessels, campaign manager of Sierra Club Military Outdoors, said Smith’s bill would help “in eliminating those barriers to access, so veterans can heal on the lands they swore an oath to protect.”

During House debate, Smith recounted how one combat wounded veteran who served in Iraq was suffering severe depression, anxiety, and post-traumatic stress disorder responded to outdoor therapy. He had made three visits to the VA psychiatric wards and a substance abuse rehab. But it was a backpacking trip led by the Sierra Club that changed his perspective. Smith quoted the vet’s own words: “when the depression, anxiety, and everything else that comes with PTSD creeps back into my life, I know just what to do: Strap on a pack and get outside.’’