TRENTON, NJ (MERCER)–Trenton Police Director Sheilah A. Coley announced yesterday that a Trenton man had been arrested for multiple drug and firearm offenses on Mar. 4, 2021 after a joint city, county, and state operation seized dozens of doses of crack cocaine, multiple firearms, and thousands of dollars in suspected drug proceeds.

The arrest was carried out following a joint operation by detectives with the TPD Violent Crimes Rapid Response Unit (VCRR) and the N.J. Division of Criminal Justice, as well as SWAT team members from both the TPD Street Crimes Unit and the Mercer County Sheriff’s Department.

Law enforcement executed search warrants for 110 Kirkbride Ave in Trenton, 6 Jed Court in Hamilton, and a 2012 Buick Lacrosse. When officers entered the premises at 110 Kirkbride Ave, they immediately encountered Shannon in the front room where he was handcuffed and secured without incident. Shannon was found with $400 in his pocket and 74 grams of crack cocaine contained in a clear sandwich type bag stuffed down the front of his pants.

A search of the house revealed a Charter Arms .38 Special revolver loaded with six rounds found on the couch by the television in the front room. A .44 caliber black powder handgun was found underneath the same couch. Two boxes of .38 caliber ammunition were found on top of the kitchen cabinet and a digital gram scale was located on the kitchen counter. Two Richards 12-gauge black powder shotguns were found in a third-floor room.

Other officers searched the 6 Jed Court apartment where they confiscated a duffel bag with $3,564 in suspected drug proceeds. The Buick Lacrosse was towed to police headquarters pending forfeiture proceedings.

The three-week investigation revealed Shannon used the house at 110 Kirkbride Ave. to sell crack cocaine from mid-day through the night and as late as 5:00 a.m. on most days.

“This is another instance of TPD officers working proactively to ensure the safety of our residents by taking illegal guns and dangerous narcotics of the streets,” said Director Coley. “My thanks to the N.J. Division of Criminal Justice and the Mercer County Sheriff’s Department for their assistance in this case.”

These charges and allegations are merely accusations, and the defendants are presumed innocent unless and until proven guilty. This is an ongoing investigation. 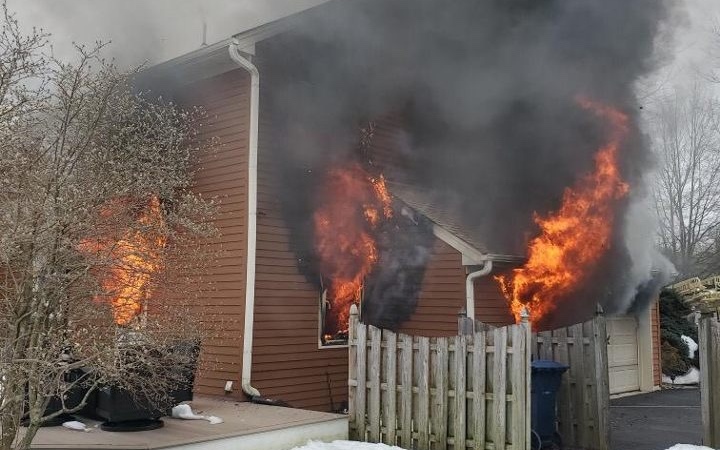 LAWRENCE TOWNSHIP (MERCER)— Multiple fire companies responded to 2 Fairview Terrace just after 10:00 am for a reported fire in the laundry room. The first alarm was called when units arrived on scene with smoke showing.

The fire rapidly spread over the garage. Flames could be seen shooting from the windows of the rear and left side of the home. Two lines were stretched into operation to extinguish the fire.

The fire was placed under control just before 10:45 am.