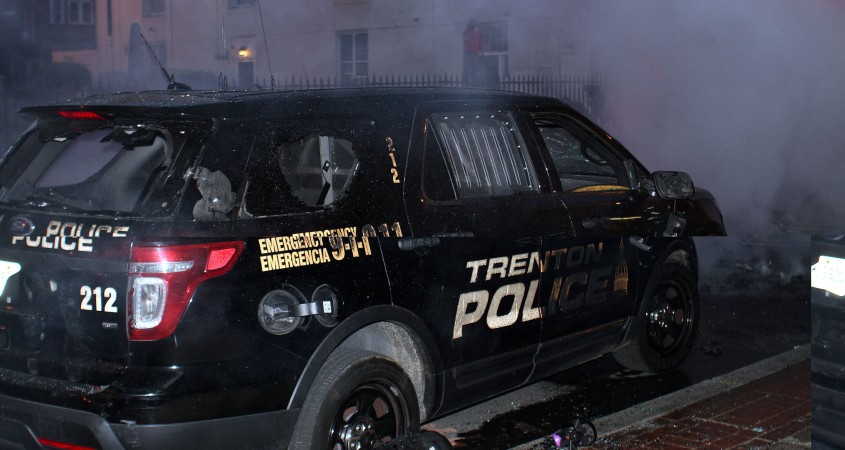 TRENTON (MERCER)– Attorney General Gurbir S. Grewal announced that a man was indicted for allegedly throwing an explosive device at members of the New Jersey State Police on May 31, 2020.

Kadeem Dockery, 29, of Trenton, N.J., was indicted yesterday, March 15, by a state grand jury on the following charges:

According to charging documents in this case and statements made in court, at about 8:13 p.m. on May 31, 2020, Dockery allegedly lit an explosive device and threw it through the open driver’s window of a Trenton Police vehicle. It exploded and smoke began emanating from the vehicle. At approximately 8:20 p.m., Dockery allegedly removed his T-shirt and gave it to another man, Killian F. Melecio, who walked around the rear of a second Trenton Police vehicle. Melecio and a third man, Justin Spry, allegedly inserted the T-shirt into the gas tank of the police vehicle and tried to light it on fire. At that point, New Jersey State Troopers attempted arrests. Melecio fled as Spry allegedly resisted the arresting troopers. Dockery, Melecio and Spry all face federal charges filed by the U.S. Attorney’s Office for the District of New Jersey related to the attempts to burn police vehicles.

At approximately 8:21 p.m., New Jersey State Troopers were beside the second police vehicle, attempting to arrest Spry. At that time, Dockery allegedly crouched on the other side of the police vehicle, lit another explosive device, and threw it over the vehicle at a group of New Jersey State Troopers. He allegedly ran away as the device exploded at the feet of the troopers, causing one to suffer temporary loss of hearing.

“We will not tolerate violence directed at law enforcement,” said Attorney General Grewal. “Dockery’s alleged actions might have resulted in serious injuries to the state troopers, who risk their health and safety every day to protect our communities. This indictment reflects our commitment to protect our law enforcement officers by prosecuting those who threaten or harm them to the full extent of the law.”

“This week, 144 graduating New Jersey State Troopers will take an oath to defend life and property and accept the responsibility of willfully placing themselves in grave danger to uphold that oath.  The rigorous physical and mental training every trooper receives is to prepare them to handle violent and chaotic situations, like the one allegedly perpetrated by Dockery, with the same poise and professionalism of the responding troopers who were assaulted in Trenton,” said Colonel Patrick J. Callahan, Superintendent of the New Jersey State Police. “I commend the hard work and dedication of New Jersey State Police Sgt. Hugo Ribeiro, who served as the case agent on the investigation with the FBI, and our partnering agencies that led to this indictment.”

Attorney General Grewal credited special agents of the FBI and task force officers of the FBI Joint Terrorism Task Force in Newark, under the direction of Special Agent in Charge George M. Crouch Jr. He also thanked Sgt. Hugo Ribeiro and other members of the New Jersey State Police assigned to the FBI task force, under the direction of Superintendent Colonel Patrick J. Callahan. Sgt. Ribeiro served as case agent on the investigation with special agents of the FBI.

The charges are merely accusations and the defendant is presumed innocent unless and until proven guilty in a court of law.