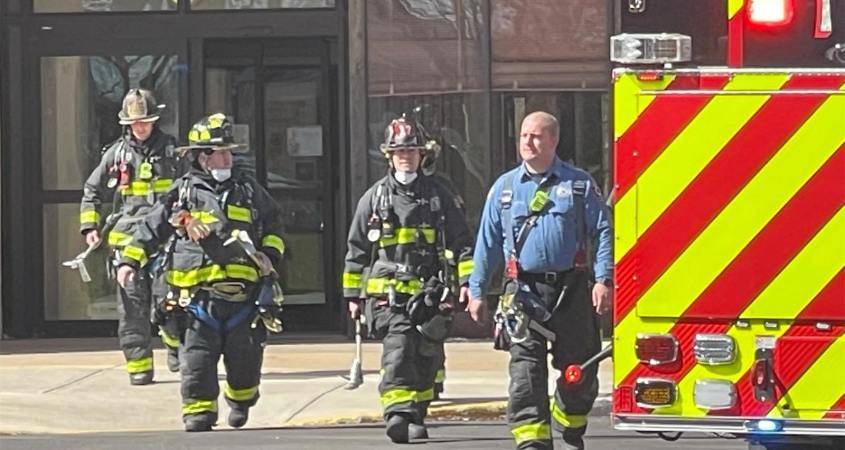 Photos and story by: Colin McCormick

HAMILTON TOWNSHIP, NJ (MERCER)—Around 10:30 this morning, the Hamilton Township Fire Department responded to the Alvin E Greshen Apartments located at 1655 Klockner Road for a smoke condition in an apartment.

Squad 12, Engine 18, Engine 14, Truck 17, Battalion 10 responded to the scene. After an investigation, crews found a fire on the stove in a 2nd floor apartment. Upon entry, it was found that the fire was contained to a pot on the stove.

The fire department remained on scene for around a half hour.

UPPER FREEHOLD TOWNSHIP, NJ (MONMOUTH)–A car lost control struck a utility pole on CR Route 524 severing it, causing wires to fall to the ground this morning at a curve known for serous accidents over the years.

The Hope Fire Company of Allentown, NJ State Police and Capital Health EMS were dispatched around 9:35 a.m. for an overturned vehicle near Tractor Supply Company. Upon arrival of EMS it was determined that there were no injures in the accident but wires from the down pole were across the roadway. Hope Fire Company and NJSP closed the CR Route 524 roadway from the 2nd driveway at Tractor Supply to Sharon Station Road. Barricades were called for from Monmouth County Highway Department to shut roadway until the repairs can be made.

A known curve with serious accidents over the years and recently on November 21, 2020 a similar accident occurred. The curve is posted at 35 MPH it is unknown why the vehicle lost control at this time.

The fire broke out in the 1000 block of Franklin Street around 12:50 am. Firefighters arrived on the scene with heavy fire conditions throughout the vacant 2.5 story semi-family dwelling. The “all hands” was called, but was then quickly upgraded to the second alarm for extra assistance in knocking down the blaze.

A master stream and multiple hose lines were put into operation. The bulk of the fire was knocked down around 1:30 am. It is unknown if anyone was injured in the incident.

This fire remains under investigation.