TRENTON, NJ (MERCER)–Around 8:30 pm Trenton Police, Trenton Fire Department, Trenton EMS and Capital Health Paramedics were dispatched to Route 29 North Bound near South Hermitage Avenue for a serious pedestrian accident near the pedestrian overpass. The highway was shut down for the accident investigation and it appeared that the pedestrian suffered life threating injuries. Expect the highway to be closed for some time while the police conduct the investigation. A detour is set up from Calhoun Street to Parkside Avenue on the North Bound side of Route 29. Google Maps also has a south bound detour on Route 29 at Lee Avenue. If traveling on Route 29 in the area seek an alternate route.

MidJersey.news has reached out to Trenton Police Department for official information please check back for updates.

Ed Note on editorial standards: This was a horrific accident involving a person and the family and friends of that person were on scene in distress. In an editorial standard MidJersey.News and OnScene news has editorially chosen not to use photos or video that show a body and another objects lying in the street. Another local “news” publication shows a video and photos of the body in the street along with family and friends standing near the scene. There is no editorial purpose to use photos/video like that to tell a story of an accident this horrific and shows no compassion towards the family or friends. There are times when photos of that nature may need to be used to tell the story but not in this case. That publication has no couth. Quite possibly the more important story is that why did the person not use the pedestrian overpass to cross the highway? (if that is what the person was doing in the highway). Numerous people have been struck by vehicles in this area in the past and if they are crossing the highway why are they not using the pedestrian overpass that is right there? Can the State DOT provide additional fencing in the center median to prevent crossings by forcing people to use the pedestrian overpass? This is a tragedy that should not happen again but unless action is taken by government officials we are afraid this will happen again.

TRENTON, NJ (MERCER)–Tonight around 9:20 pm a two vehicle crash occurred between a Ford contractor van and a Dodge Charger leaving at least two injured. The accident happened at the intersection of Chambers Street and Forrest Street leaving the Dodge Charger crashed into the St. Francis Medical Center parking garage and ladders and other equipment on the roadway from the contractor van. Trenton EMS was on scene treating patients and Trenton Police set up a detour in the area while vehicles were towed from the scene.

MidJersey.News has reached out to Trenton Police Department for official details check back for an update. 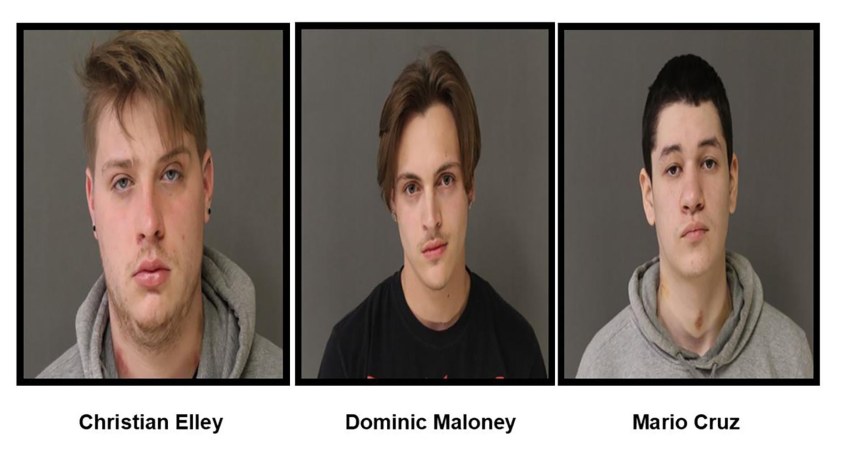 HAMILTON TOWNSHIP, NJ (MERCER)–On April 1, 2021 at approximately 11:00 pm, Hamilton Police were detailed to the area of Barnt Deklyn Road and Andrew Street for a disturbance involving several people fighting. Responding Officers located several people still in the area and learned that two handguns were involved in this incident. Investigating officers located a spent handgun shell casing at the scene. Once victim was located with a head injury from being struck with the butt of a gun. He was treated for his injuries and released from the hospital.

All three suspects were processed and transported to the Mercer County Correctional Facility awaiting arraignment.

Every defendant is innocent until being found guilty beyond a reasonable doubt in a court of law.

MidJersey.news photos from the scene here:

TRENTON, NJ (MERCER)–The Easter Bunny was escorted by the Trenton Fire Department today on Ladder 4 along with Engine 10, Trenton Police and Mayor W. Reed Gusciora. The event started around 11:30 am at Trenton Fire Headquarters on Perry Street and arrived around 1:45 pm at Cadwalader Park. The Easter Bunny handed out bags of goodies while posing for several photos before getting ready to visit children again tonight. The event is sponsored by: Trenton FMBA Locals 6 & 206, Kiwanis Club of Trenton, Science Mentors One-to-One and Wegman’s Market. 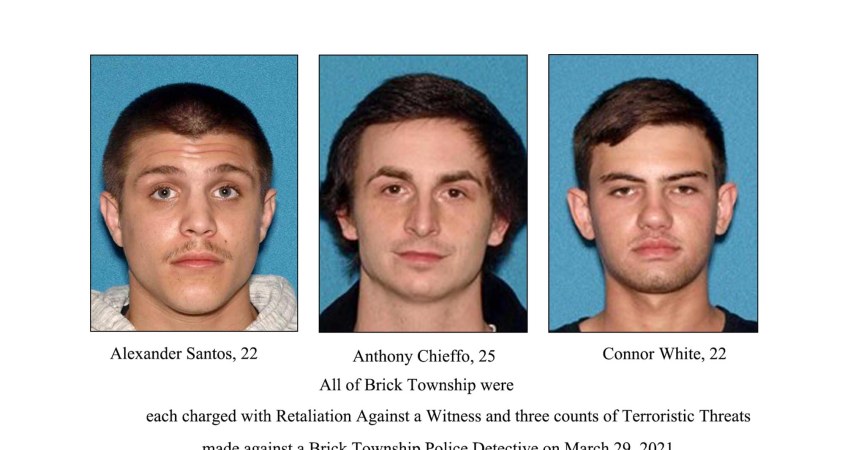 Updated: Charges against Alexander Santos, 22, have been administratively dismissed at the request of the Ocean County Prosecutor’s Office due to exculpatory evidence that exonerates the defendant.

On March 29, 2021, a Brick Township Police Detective reported receiving threatening phone calls and text messages on his police department-issued cellular phone; the threats were directed at the Detective and members of his family.  A subsequent investigation by the Ocean County Prosecutor’s Office Major Crime Unit and Ocean County Prosecutor’s Office High Tech Crime Unit revealed that the threatening calls and text messages had originated from Chieffo’s cell phone.

On March 30, 2021, Detectives from the Ocean County Prosecutor’s Office Major Crime Unit performed a motor vehicle stop in Brick Township on a vehicle being operated by Santos, in which Chieffo was a passenger.  Santos and Chieffo were taken into custody and transported to Brick Township Police Headquarters where they were charged accordingly.  Both defendants are currently lodged in the Ocean County Jail pending their respective detention hearings.

Although sufficient probable cause existed at the time of his arrest to support the filing of charges against Santos, continuing investigation in this matter has revealed that White – not Santos – was the second individual who participated in making the threats against the Brick Detective in concert with Chieffo.  Consequently, White was taken into custody on April 1, 2021 and charged accordingly.  He is presently lodged in the Ocean County Jail pending a detention hearing.

“At the outset of this investigation, sufficient credible evidence pointed to Chieffo and Santos as the individuals that threatened the Detective,” Prosecutor Billhimer stated.  “As the investigation progressed, however, we were able to identify White as the second actor who participated with Chieffo in making those threats.  Additional information discovered during the investigation was exculpatory as it relates to Santos.  As such, the charges against Santos have been dismissed and he has been released from the Ocean County Jail,” Prosecutor Billhimer concluded.

“Threats against law enforcement will not be tolerated,” Prosecutor Billhimer stated.

Upon arrival, emergency personnel found the structure to be fully engulfed by flames. Firefighters located the body of an 82 year-old female, later identified as Salvacion Elyea, in the downstairs portion of the residence. She was pronounced deceased at the scene. A second victim jumped from the second story of the residence to escape the fire and received minor injuries. A pet dog has not yet been accounted for. A Jackson Township Police Officer was treated at the scene for smoke inhalation. A second Jackson Township Police Officer was transported to Monmouth Medical Center-Southern Campus in Lakewood, treated for minor injuries, and released.

The Ocean County Medical Examiner has determined the cause of Ms. Elyea’s death to be smoke inhalation, and the manner of her death to be accidental.

TOMS RIVER, NJ (OCEAN)–Ocean County Prosecutor Bradley D. Billhimer announced that on April 1, 2021, Jeydon Lowe, 25, of Barnegat, was sentenced by the Honorable Linda G. Baxter, J.S.C., to a term of seven years New Jersey State Prison as a result of a previously entered guilty plea to Vehicular Homicide in violation of N.J.S.A. 2C:11-5.  This sentence is subject to the terms of the No Early Release Act, N.J.S.A. 2C:43-7.2, meaning Lowe will be required to serve at least 85 percent of his prison sentence before he may be considered for parole eligibility.  Additionally, Judge Baxter suspended Lowe’s driving privileges for a period of five years in connection with his previously entered guilty plea to Driving While Intoxicated in violation of N.J.S.A. 39:4-50.  Lowe pled guilty to both charges before Judge Baxter on January 27, 2021.

On March 25, 2020, at approximately 5:30 p.m., officers from the Stafford Township Police Department responded to a single vehicle crash on Stafford Avenue near Hilliard Boulevard.  An investigation by the Ocean County Prosecutor’s Office Vehicular Homicide Unit, Stafford Township Police Department, and Ocean County Sheriff’s Office Crime Scene Investigation Unit revealed that a 2009 Chevrolet Cobalt operated by Lowe was traveling eastbound on Stafford Avenue at an extremely high rate of speed.  Lowe lost control of the vehicle as he was attempting to navigate a right-hand turn, and consequently crashed into a tree.  A passenger in the front seat of the vehicle, Robert Parlin, 24, of Little Egg Harbor, succumbed to his injuries as a result of the crash and was pronounced deceased at the scene.

Lowe sustained minor injuries and was taken to Hackensack Meridian Health Southern Ocean County Medical Center in Stafford Township. A search warrant was obtained for a draw of his blood.  On April 14, 2020, Detectives received the laboratory results from the blood draw which indicated that Lowe had a Blood Alcohol Concentration (BAC) of nearly .12 percent.  An operator of a motor vehicle is presumed to be over the legal limit for purposes of alcohol consumption where his/her BAC is .08 or greater.

“This is an absolutely tragic case, which should serve as a cautionary tale for anyone who is tempted to drink and drive,” Prosecutor Billhimer stated.  “Let me be clear:  drunk driving kills, and it has the potential to tear families apart.  Sadly, these types of cases are wholly preventable, particularly in this day and age of Uber, Lyft, and other readily available transportation services.  While this young defendant will go to prison for a long time for his senseless conduct on the night in question, nothing will bring Mr. Parlin back to his family” Prosecutor Billhimer concluded.

Prosecutor Billhimer acknowledges the diligent efforts of Senior Assistant Prosecutor Jamie Schron who handled the case on behalf of the State, as well as the Ocean County Prosecutor’s Office Vehicular Homicide Unit, Stafford Township Police Department, and Ocean County Sheriff’s Office Crime Scene Investigation Unit for their combined efforts in connection with this investigation which resulted in Lowe’s guilty plea, and ultimately his state prison sentence.

EAST WINDSOR, NJ (MERCER)–East Windsor Township and The Watershed Institute, in cooperation with the Americorps Watershed Ambassador Program, are co-sponsoring a stream cleanup on Saturday, April 24 from 9 a.m. to 11 a.m. at Etra Lake Park, located on Disbrow Hill Road.  Residents are encouraged to join in the stream clean-up to help collect trash and recyclables in the area.

Mayor Mironov stated, “We encourage residents to participate in this worthwhile community cleanup effort at Etra Lake Park, as a terrific way to help protect our natural resources.  The purpose of this cleanup is to remove litter from our local watershed streams, to assist in keeping our water sources clean and providing for a cleaner and more environmentally healthy stream.”

Residents who want to participate MUST PRE-REGISTER BY FRIDAY, APRIL 16.  To ensure compliance with current health guidelines, pre-registration is required and a maximum of 25 people per available time slot will be permitted, masks covering the mouth and nose are mandatory, and temperature checks will be performed upon arrival. Hand sanitizer will be available, but it is recommended that participants bring their own in order to best maintain a safe distance between groups and staff. Volunteers should wear closed-toed shoes and long pants and bring work gloves and a reusable water bottle. Trash bags will be provided. Adults must accompany minors.  For further information or to register, visit The Watershed Institute website at www.thewatershed.org or contact Erin Stretz at estretz@thewatershed.org or (609) 737-3735, ext. 17.