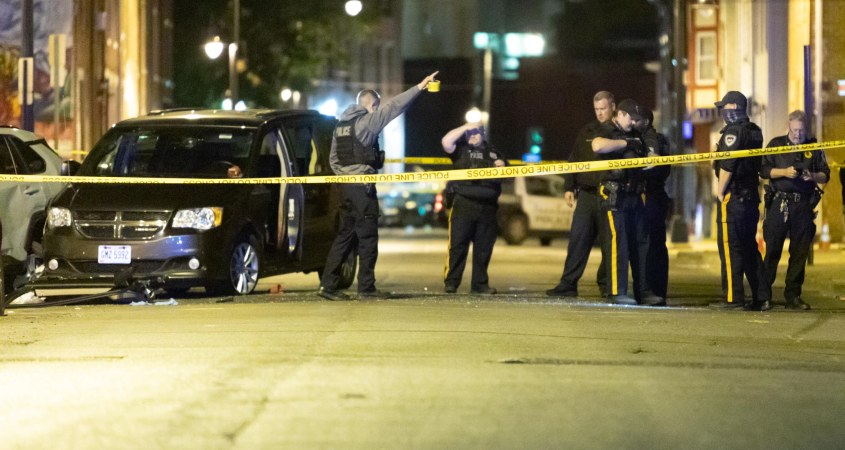 Just before 11 p.m. on Saturday, May 15, 2021, Trenton police responded to the area of North Hanover and Stockton on reports of a shooting in progress and a motor vehicle accident.  Trenton Police Communications also received a Shot Spotter activation for nine rounds in the 200 block of N. Stockton Street.  Arriving officers located a dark gray Dodge Caravan crashed into an unoccupied Toyota Rav4.  The Dodge Caravan had been struck by gunfire approximately 10 times.  David Williams, 36, was found in the driver’s seat of the Dodge Caravan suffering from multiple gunshot wounds.  He was extricated from the vehicle by the Trenton Fire Department and transported to the hospital, where he was pronounced dead a short time later.  An adult female passenger in the car was uninjured from the shooting, however, she was taken to the hospital for injuries from the accident.

Officers secured the crime scene and while canvasing the area, located an additional scene at the intersection of N. Stockton and E. Hanover streets, where the Shot Spotter activation occurred.  Broken glass was found all over the middle of the street along with more than a dozen spent 9mm shell casings.

As part of the investigation conducted by the Mercer County Homicide Task Force, area video surveillance was reviewed, and witnesses were interviewed.  Detectives were able to identify Tyrell Williams as the suspect shooter.

A search incidental to Williams’ arrest on Thursday revealed approximately 10 grams of raw heroin.  Subsequently, he was charged with multiple narcotics offenses.

The murder remains under investigation and anyone with information is asked to call HTF Detective Jennifer Eyster at (609) 989-6406.  Information can also be emailed to mchtftips@mercercounty.org.