A short time later at 10:06 p.m. an accident was spotted from the Sharon Road overpass in the area of the 62.7 mile marker north bound outer roadway. Firefighters, EMS and paramedics were redirected to the Turnpike.

Upon arrival a person was found to be in a serious accident and was transported by Robbinsville EMS and Capital Paramedics to the Trauma Center at Capital Health Regional Medical Center in Trenton. A “trauma alert” was called due to the seriousness of the injuries.

NJ State Police is investigating the crash on the NJ Turnpike. No further information was available. 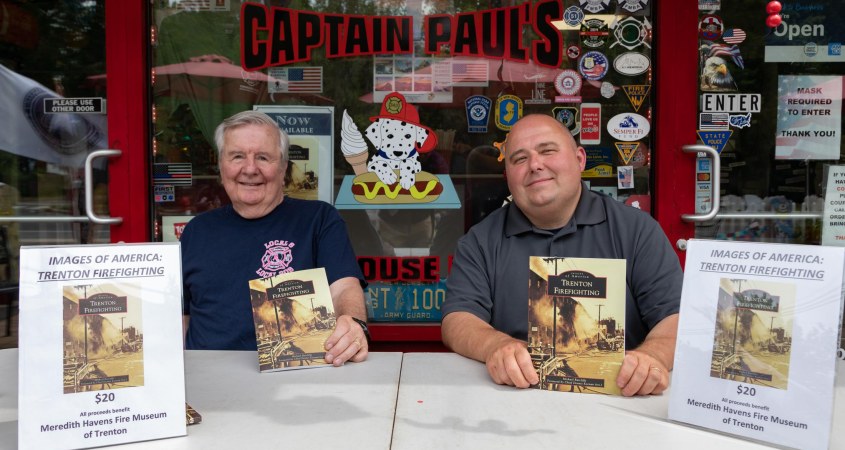 From 11 a.m. until 2 p.m. retired Trenton Fire Chief Dennis Keenan and Michael Ratcliffe, a career firefighter with the Lawrence Township Fire Department, were on hand to sell and discuss their new book, Trenton Firefighting.

The book, released earlier this year by Arcadia Publishing as part of the company’s “Images of America” series, documents the history of firefighting in Trenton, from the formation of Trenton’s first volunteer fire company in 1747, through the city’s transformation to a career (paid) fire department in 1892, and up to the present modern department of the 21st Century. The book features nearly 200 rare photos from the fire museum’s collection and from the archive of the Trenton Free Public Library’s Trentoniania Local History Collection.

Keenan, who joined the Trenton Fire Department in 1962 and rose through the ranks to become chief of department in 1992, authored the foreword to the book. Ratcliffe, a former newspaper reporter who spent 20 years as a volunteer firefighter in Lawrence prior to being hired as a career firefighter in 2013, researched and wrote the book. The book is the culmination of two years’ work by the pair.

All proceeds from sales of the book directly benefit the Meredith Havens Fire Museum of Trenton, the mission of which is to preserve, celebrate, and promote the rich history of firefighting in New Jersey’s capital city and the surrounding Mercer County area.

Founded in 1959 and first opened to the public in 1961 as the Trenton Fire Museum, the museum was renamed in 1974 in honor of its co-founder and first curator, insurance salesman Meredith Havens. Today the museum is housed in Trenton’s historic 1927 Fire Headquarters building, located on Perry Street adjacent to the new Trenton Fire Headquarters that opened in 2000. The museum is a registered 501(c)(3) non-profit and is run by a volunteer board of trustees. Keenan is president of that board and Ratcliffe a member.

While the museum itself is presently closed to the public due to COVID-19 restrictions, copies of the book may be purchased for $20 from the Trenton Fire Department clerk’s office and the Trenton Firemen’s Federal Credit Union, both located at Trenton Fire Headquarters at 244 Perry Street. Copies of the book may also be purchased via mail by sending $20 payment to Meredith Havens Fire Museum, in care of Dennis Keenan, at 217 Kensington Avenue, Trenton, N.J. 08618. Please add $3.25 for packaging and postage, with checks made payable to the Meredith Havens Fire Museum. 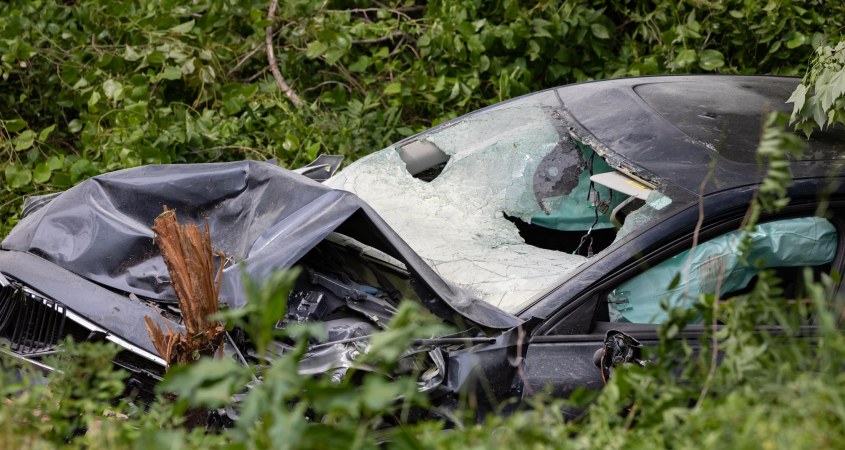 HAMILTON TOWNSHIP, NJ (MERCER)–On Saturday, May 22, 2021, at approximately 12:30 p.m., a single car motor vehicle crash occurred on Hughes Drive near the intersection of Youngs Road. The driver Jeffrey Mandell of West Windsor, NJ operating a 2019 Volvo S60 was traveling west on Hughes Drive when he veered off the roadway along the north side curb edge.  Mr. Mandell traveled along the wooded edge of the roadway striking several tree branches. Mr. Mandell’s vehicle came to rest in a dried creek bed in the wooded area along the north side of Hughes Drive  Mr. Mandell was assisted at the scene by several passing motorists until emergency personnel arrived on scene. Mr. Mandell was transported to Capital Health Regional Medical Center in Trenton for treatment of his injuries.

The crash is being investigated by Officer K. McDonald and Officer J. Anaya.  Any witnesses are asked to contact the Hamilton Police Traffic Unit at (609)581-4000.

Information may also be left anonymously on the Hamilton Police Crime Tip Hotline at 609-581-4008.