HAMILTON TOWNSHIP (MERCER)– One person is in serious condition after being struck by a vehicle while operating a moped-style bike Tuesday night.

The crash occurred just after 9:00 pm. Hamilton Police responded with Robert Wood Johnson EMS and Capital Health Paramedics to Route 33 and Whitehorse Mercerville Road in front of the Mercerville Shopping Center on reports of a vehicle vs motorcycle. EMS quickly arrived on the scene and transported the man who was operating the motorized bike to the trauma center in serious condition. Hamilton Township Fire Police were also detailed to the scene to assist with traffic control.

Police remained on the scene for a thorough investigation into the crash. Route 33 between Whitehorse Mercerville Road and Shady Lane remains shut down at the time of this report.

No other info is available at this time, please check back for updates.

TRENTON, NJ (MERCER)–Around 7:20 p.m. the Trenton Fire Department was dispatched to the Lamberton Deli Grocery at the corner of Bridge Street and Lamberton Streets. Upon arrival firefighters had a heavy smoke condition coming from the building. One 2 1/2″ attack line and at least one 1 3/4″ backup line was placed in service as truck companies went to the roof to vent. Firefighters advanced though the front door and quickly knocked down the fire and were able to hold the fire at the 1st Alarm.

Trenton Fire Department fire investigators were still on scene at the time of this report and were also awaiting a State of New Jersey Fire Marshal. All units have returned except for 1 engine staying on scene for the investigation. 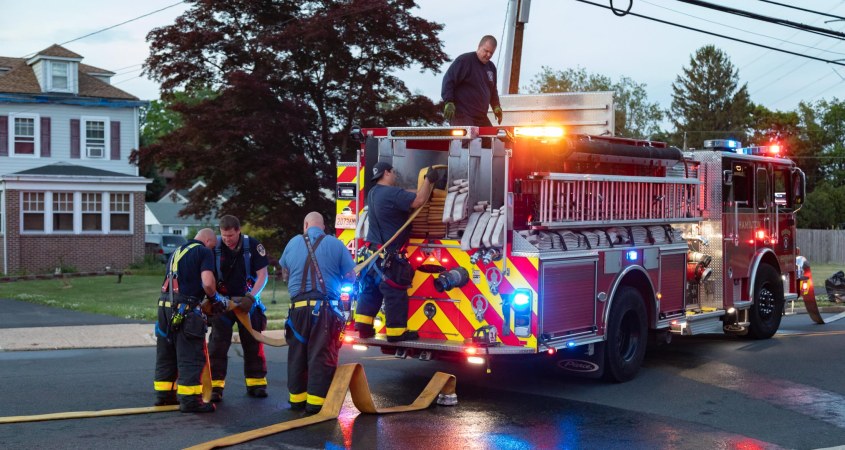 When Hamilton firefighters arrived on scene they reported a fully involved gazebo fire in the rear of the property with exposures issues and possible extension to a garage. Firefighters stretched 1 3/4″ lines and quickly extinguished the fire before it could spread and severely damage other buildings on the property.

The Hamilton Township Fire Marshal’s Office was on scene investigating at the time of this report.

The Hamilton Township Police Department shut down Nottingham Way between Shady Lane and Berkley Street until firefighters could pick up the supply line and clear the street of apparatus.

No further information is available. 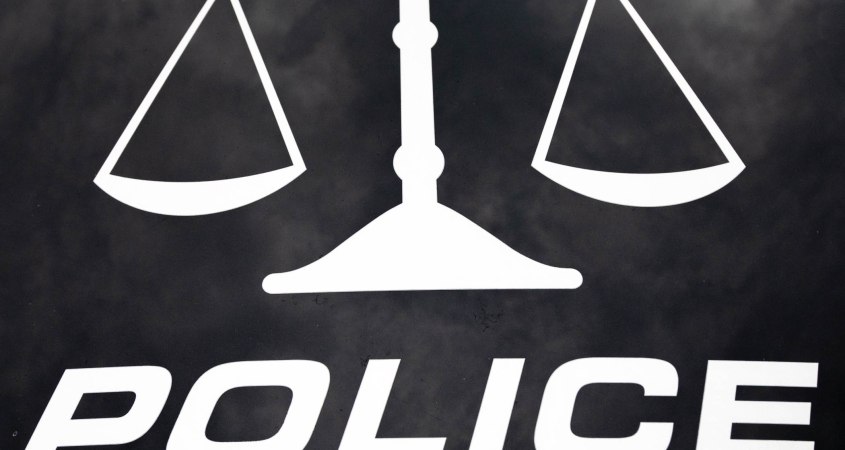 TRENTON, NJ (MERCER)–A Mercer County, New Jersey, man was sentenced today to 84 months in prison for his role as a member of a drug trafficking conspiracy and his possession of multiple semiautomatic firearms in furtherance of his unlawful drug-trafficking activities, Acting U.S. Attorney Rachael A. Honig announced.

In October 2018, West and 25 other individuals were charged by criminal complaint with conspiracy to distribute heroin; West and others also were charged with firearms offenses relating to their drug trafficking. On Feb. 27, 2020, a grand jury returned a 10-count third superseding indictment charging West and six other defendants with conspiracy to distribute one kilogram or more of heroin and various other drug and firearms offenses. Of the 26 defendants originally charged in the criminal complaint, West is the 23rd defendant to have pleaded guilty. The charges in the third superseding indictment remain pending against three defendants.

From as early as October 2017 to October 2018, West and others engaged in a large drug trafficking conspiracy that operated in the areas of Martin Luther King Boulevard, Sanford Street, Middle Rose Street, Southard Street, Hoffman Avenue, Chambers Street, and Coolidge Avenue in Trenton, and which sought to profit from the distribution of heroin and numerous other controlled substances. Through the interception of telephone calls and text messages pursuant to court-authorized wiretap orders, controlled purchases of heroin, the use of confidential sources of information, law enforcement learned that Jakir Taylor and Jerome Roberts obtained regular supplies of hundreds of “bricks” of heroin from David Antonio, whom they referred to as “Pop” and “Papi,” and that they distributed those supplies of heroin to other dealers and end users in and around Trenton.

During the investigation of the conspiracy, on Sept. 6, 2018, law enforcement officers stopped a green 2002 Volkswagen Passat driven by, and registered to, Timothy Wimbush, a/k/a “Young Money,” and occupied by West, Taquan Williams, a/k/a Trip,” and a juvenile. Law enforcement officers recovered from West’s pocket a quantity of heroin, and during a subsequent search of the vehicle, law enforcement recovered from a secret trap compartment under the rear passenger’s seat approximately 57 bricks of heroin, four semiautomatic firearms – including a .223 caliber assault rifle linked with a shooting in Trenton four days earlier – and hundreds of rounds of ammunition. Law enforcement officers identified the heroin as having been supplied by other members of the conspiracy. The charges against Wimbush and Williams remain pending.

In addition to the prison term, Judge Wolfson sentenced West to three years of supervised release.

This case was conducted under the auspices of the Organized Crime Drug Enforcement Task Force (OCDETF) and the FBI’s Greater Trenton Safe Streets Task Force, a partnership between federal, state and local law enforcement agencies to enhance the identification, apprehension, and prosecution of individuals involved in gang-related activities, violent crime, and drug distribution in and around the greater Trenton area. The principal mission of the OCDETF program is to identify, disrupt and dismantle the most serious drug trafficking, weapons trafficking, and money laundering organizations and those primarily responsible for the nation’s illegal drug supply.

The charges and allegations pending in the third superseding indictment against the remaining defendants are merely accusations and those defendants are presumed innocent unless and until proven guilty.

Shemar Corbett, 25, of Trenton, is charged with one count of obstructing traffic.

After numerous complaints about ATVs and dirt bikes throughout Trenton, the TPD, along with its partners at the N.J. State Police, planned an ATV interdiction sweep. Most recently, TPD had received complaints showing video of dirt bikes and ATV’s riding recklessly near the marina and park on the 1100 block area of Lamberton Street.

The sweep used valuable intel from concerned citizen groups and increased surveillance – including a drone – to survey all known areas throughout the city where ATV and dirt bikes gather and refuel.

In addition, the City of Trenton Division of Traffic and Transportation worked with the Mercer County Park Commission to place barricades on the bottom of the park’s foot bridge to restrict access to foot traffic and bicyclists only.

“We get it: ATVs can be a fun summer activity for many of our city residents,” said Director Coley. “But their use inside the city is illegal for a reason, and one person’s recreation cannot come at the expense of the safety and well-being of other residents. TPD, along with its state partners, will step up enforcement to deter this reckless behavior before anyone else is seriously injured. Fines, forfeiture, and possible criminal charges await those individuals who do not comply.”

On May 21, 2020, Trenton City Council unanimously passed Ordinance 20-39, “Off-Road Vehicle Regulations,” which was then signed by Mayor W. Reed Gusciora. ATVs are prohibited by both state and municipal law on or within any City-owned or operated road, park, or other public space. State law designating these vehicles as contraband authorizes TPD Officers to investigate any person suspected of engaging in the unlawful operation of an ATV and to seize that vehicle. In addition to the penalties set forth by the state, violations shall be punishable by a municipal fine of up to $1,000 as well as confiscation, forfeiture and destruction of the vehicle.

Anyone with information about illegal ATV use should contact the TPD anonymous tip line at (609) 989-3784.

On May 19, 2020 a violent episode on quads ATV left a man shot in the buttocks and one was arrested and a gun recovered you can read about that MidJersey.news story here: 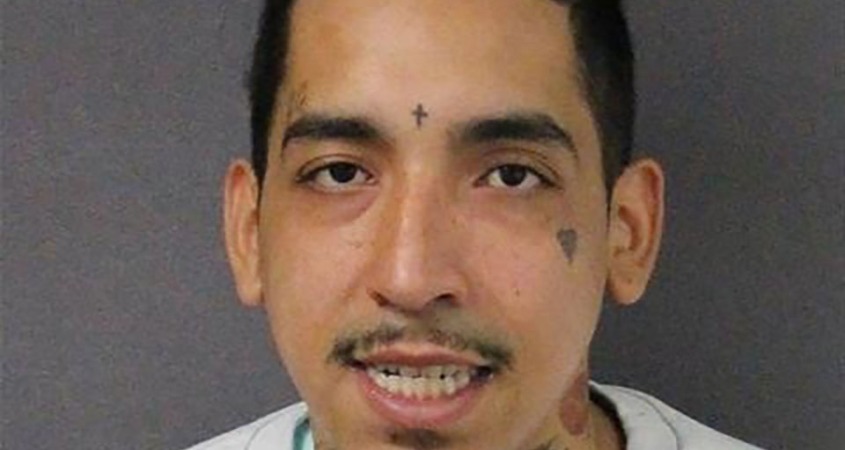 HAMILTON TOWNSHIP, NJ (MERCER)–Mercer County Prosecutor Angelo J. Onofri reported today that an investigation by the Mercer County Homicide Task Force has led to the arrest of a Ewing man for last week’s murder of Katherine Montenegro at a Hamilton Township 7-Eleven.

On Tuesday, May 18, 2021, at approximately 1:50 a.m., Hamilton Police Division Patrol Units responded to a shooting in progress in the parking lot of the 7-Eleven on Lalor Street.  Officers arrived on scene and located the victim, identified as 23-year-old Katherine Montenegro of Trenton, lying in the parking lot near the storefront curb suffering a gunshot wound to the abdomen.  She was transported to the hospital where she was pronounced dead a short time later.

As part of the investigation conducted by the Mercer County Homicide Task Force, area video surveillance was reviewed, and witnesses were interviewed.  Detectives established that Lopez and the victim were acquaintances, and Lopez was identified as the suspected shooter.

The murder remains under investigation and anyone with information is asked to call HTF Detective Ahmad Mansur at (609) 989-6406.  Information can also be emailed to mchtftips@mercercounty.org.