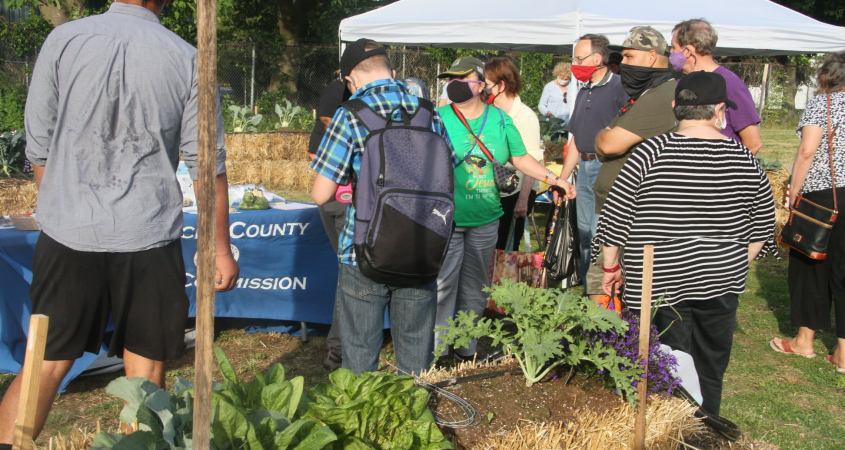 TRENTON, NJ (MERCER)–Today, Seattle-based artist Sarah Kavage, community liaison and Trenton-based artist Leon Rainbow, and representatives from the Capital City Farm taught about THE FUTURE IS OPEN ENDED, a large, elaborate sculptural garden installation made of straw bales. This is art that will grow food and provide gathering spaces and seating for events, performances, teach-ins, and sharing.

The site of this installation, the Capital CIty Farm, was formerly train tracks and is now Trenton’s first urban farm. The site has undergone environmental remediation and since 2016 has been growing fresh healthy food for the community, largely for the Trenton Area Soup Kitchen.

The artwork is a large, elaborate straw bale garden, a type of gardening that is well suited to urban settings. In addition to adding a highly visible food growing area, the artwork creates gathering spaces and seating, allowing the CCF to begin providing more community space alongside farm operations. Originally planned for the Tulpehaking Nature Center’s environmental education facility, the installation moved to CCF in support of and alignment with CCF’s mission of urban food growing, local employment, and education.

During the community input session for this project, people shared how they felt that this part of the city, on the border of East and North Trenton, had been punished “by lines that other people put on a map.” These redlining and urban renewal practices had an outsized impact in Trenton, especially on its Black community. The design of the artwork responds to this conversation by attempting to create a space where people feel like they can envision and define their own future.

Many turned out to celebrate the project, offered event ideas, learned about the garden, and the project partners which include the Tulpehaking Nature Center, the Garden State Agrihood Program, Trenton Area Soup Kitchen, Mercer County Park Commission, and April DeSimone of Designing the We.