HAMILTON TOWNSHIP, NJ (MERCER)–It appears that two vehicles collided on I-195 West Bound near mile marker 4.5 collided around 6:45 p.m. leaving one overturned on the right shoulder and another in the median strip. The Hamilton Township Fire Department, RWJ EMS and Capital Health Paramedics responded for reports of a person trapped in one of the vehicles. Upon arrival of the fire department there was no entrapment but EMS was needed to evaluate the occupants of the vehicles for injuries. It was unclear if anyone was transported to the hospital from the crash.

Traffic was backed up at least 2 miles from the 4.5 mile marker to the NJ Turnpike around mile marker 6.6 while the crash was cleaned up.

NJ State Police is investigating the crash. No further information is available at this time. 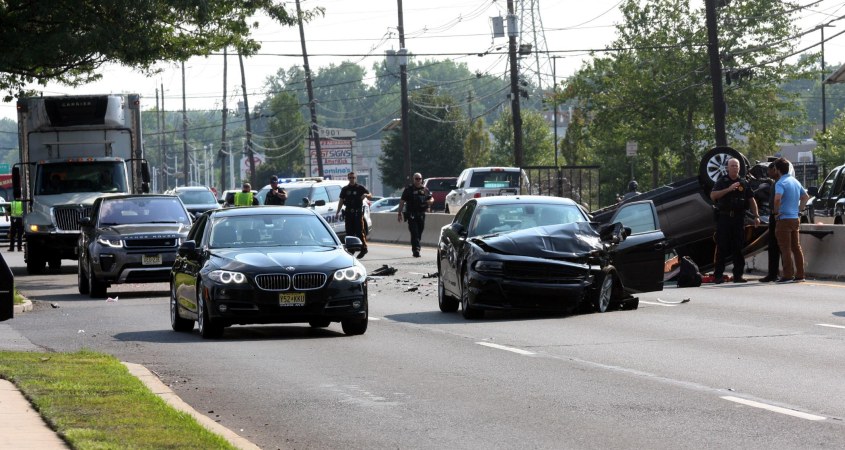 LAWRENCE TOWNSHIP, NJ (MERCER)–Today, around 4:30 p.m. on Brunswick Pike (Route 1) Northbound in area of Greenberg Road (just prior to McDonalds and Wawa) at least two vehicles, one of which overturned were involved in a serious crash.

The Lawrence Township Fire Department Rescue 22 and Rescue 21 responded for a reported person trapped in a vehicle but were not needed for rescue equipment.

Capital Health MSU transported one person to the hospital. A witness stated, “The person trapped in the overturned vehicle was taken on a stretcher and rushed to the hospital. They were admitted with serious injuries.”

Lawrence Township EMS 129 treated one person on scene but that person did not wish transport to the hospital.

Lawrence Township Police Department is investigating the crash. No further information is available at this time.

On July 26, 2021, at approximately 4:00 p.m., Officers of the Brick Township Police Department responded to the parking lot of the ShopRite on Route 70 in Brick in response to a male victim having been stabbed in the parking lot.  Responding Officers found a 44-year-old male victim with apparent stab wounds to his back.  The victim was transported to Jersey Shore University Medical Center in Neptune for treatment of his injuries, where he is reported to be in critical but stable condition.

The investigation further revealed that Kareem Reeves, 32, of Lakewood, removed Stallworth’s vehicle from the ShopRite parking lot after the stabbing in an apparent effort to hinder Stallworth’s apprehension.  As such, Reeves was charged with Hindering in violation of N.J.S.A. 2C:29-3a(1); he was arrested and transported to the Ocean County Jail, where he is currently lodged pending a detention hearing.

“Stallworth is encouraged to turn himself in; a warrant has been issued for his arrest and his name has been entered in the National Crime Information Center database.  Anyone with information concerning Stallworth’s whereabouts – or any information at all regarding this investigation – is urged to contact Detective Lindsay Woodfield of the Ocean County Prosecutor’s Office at 732-929-2027, extension 3989, or Detective Michael Bennett of the Brick Township Police Department at 732-262-1122,” Prosecutor Billhimer stated.

The charges referenced above are merely accusations and the press and public are reminded that all defendants are presumed innocent unless and until proven guilty beyond a reasonable doubt in a court of law.  R.P.C. 3.6(b)(6).

Keith Richter, a/k/a “Conan,” 62, of Bay Shore, New York, pleaded guilty by videoconference before U.S. District Judge Kevin McNulty to an Information charging him with one count of possession of a firearm by a convicted felon.

Richter is the national president of the Pagan’s Motorcycle Club (the “Pagans”)—an outlaw motorcycle gang known by law enforcement to engage in illegal activity including narcotics trafficking, weapons trafficking, and violent crimes.

On or about February 20, 2021, the Pagans hosted a party in Lancaster, Pennsylvania. While Richter was traveling from the party to his home in Suffolk County, New York, law enforcement pulled the vehicle over in Mercer County, New Jersey. Law enforcement recovered a loaded Ruger P345 .45 caliber handgun from a front-seat compartment in the vehicle. As a result, law enforcement obtained a warrant for Richter’s arrest, which was executed on February 26, 2021.

Richter was previously convicted of felony offenses, including conspiracy to commit murder and aggravated assault in aid of racketeering, for which he served a sixteen-year term of imprisonment.

The offense to which Richter pleaded guilty carries a maximum sentence of 10 years in prison and a fine of up to $250,000. Sentencing is scheduled for Dec. 3. 2021.

This case is also part of Project Guardian, the Department of Justice’s signature initiative to reduce gun violence and enforce federal firearms laws. Initiated by the Attorney General in the fall of 2019, Project Guardian draws upon the Department’s past successful programs to reduce gun violence; enhances coordination of federal, state, local and tribal authorities in investigating and prosecuting gun crimes; improves information sharing by the Bureau of Alcohol, Tobacco, Firearms and Explosives when a prohibited individual attempts to purchase a firearm and is denied by the National Instant Criminal Background Check System (NICS), to include taking appropriate actions when a prospective purchaser is denied by the NICS for mental health reasons; and ensured that federal resources are directed at the criminals posing the greatest threat to our communities.

Eleven Members Of The Pagan’s Motorcycle Club Charged With Narcotics Distribution, Firearms Offences and Violent Crimes In Aid Of Racketeering

Examples of such situations include:

Governor Murphy and Commissioner Persichilli made the following statement:

“Our metrics are trending in the wrong direction, and new data suggests the Delta variant is more transmissible even among vaccinated individuals, which is why we are making this strong recommendation.

“Fortunately, our numbers are a fraction of those in many other states, most of which have significantly lower vaccination rates. Should our numbers reach those levels, we reserve the right to take more drastic action, including a statewide mask mandate.

“We have crushed this virus repeatedly like no other state in the nation, and we are proud to boast among the country’s highest vaccination rates. But at this point, given where our metrics are now, we feel the best course of action is to strongly encourage every New Jerseyan, and every visitor to our state, to take personal responsibility and mask up indoors when prudent.

“And we equally encourage every unvaccinated resident or visitor to get vaccinated. The vaccines are proven safe and highly effective, and are the surest way we can end this pandemic.” 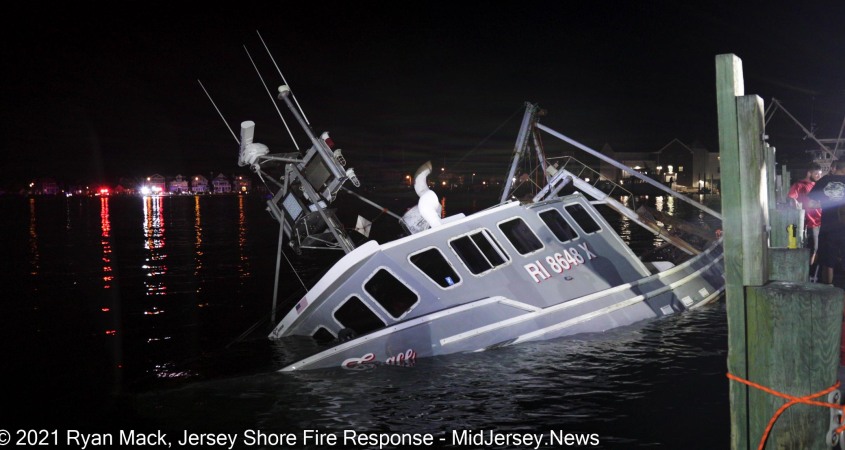 MANASQUAN INLET, POINT PLESANT, NJ (0CEAN)–Around 10:40 p.m. last night July 27, 2021 a fishing vessel reported that they were taking on water to the USCG Manasquan Inlet station. Initial reports said they had struck inlet rocks and had a hole in the vessel. Witnesses at the Manasquan Inlet (Point Pleasant Side) said that they saw a boat attempt to leave the inlet but struck the rocks and heard a bang then saw the craft turn around at a decent speed and go back into the inlet. District 27 (Manasquan Fire) was alerted of the boat hitting the rocks and dispatched Marine 27. The U.S. Coast Guard spotted the boat docked at the Wharfside Seafood & Patio Bar partially sunk. Marine 27 and Point Pleasant Beach Police were also on the scene. Two were safely off the craft and on the dock with no injuries. The cause of the crash is still unknown and is being investigated by the USCG & The New Jersey State Police.

MidJersey.News has reached out to the Public Affairs office USCG Atlantic City and NJ State Police and waiting for official press information. Once official public information is received the story will be updated. 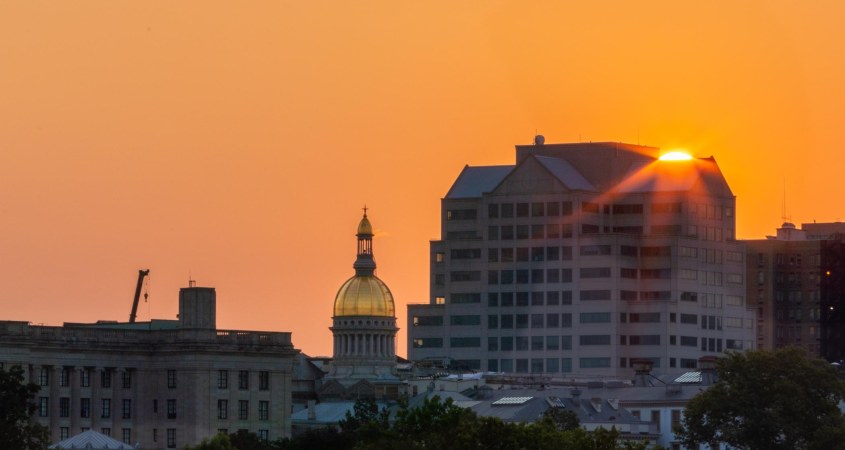 TRENTON, NJ (MERCER)–National Weather Service reports that there will be seasonably warm weather today with a high of 87F and passing shower in the southern half of the region.

Check out Air Now “Fire and Smoke Map” showing our area in relation to the forest fires out west. It does not seem as bad as last week but there could be enhanced sunrises and sunsets depending on how dense the smoke is at the time in the upper atmosphere. These maps were from the Air Now government website this morning.