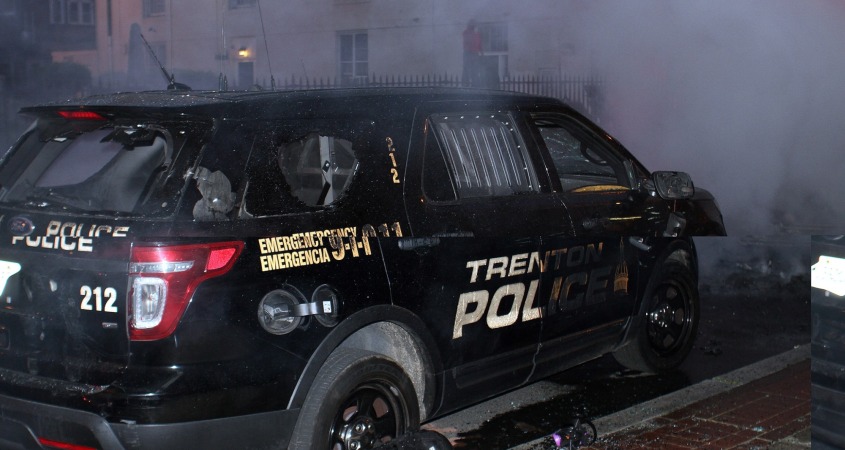 TRENTON, NJ (MERCER)–A Mercer County, New Jersey, man today admitted attempting to interfere with law enforcement officers during a civil disorder when he attempted to set fire to a police vehicle during a riot in the City of Trenton, Acting U.S. Attorney Rachael A. Honig announced.

Earlja J. Dudley, 28, of Trenton, New Jersey, pleaded guilty before U.S. District Judge Brian R. Martinotti to an information charging him with one count of attempting to obstruct, impede, or interfere with law enforcement officers during a civil disorder affecting commerce.

On May 31, 2020, large-scale protests were held throughout the United States, including in Trenton, in response to the death of George Floyd. Although the May 31st protest in Trenton was peaceful earlier in the day, violence erupted later. A group of individuals proceeded down East State Street in downtown Trenton and began to riot, smashing store fronts, looting stores, and attacking multiple marked Trenton Police Department vehicles parked on the 100 Block of East State Street.

A City of Trenton street camera and other video footage taken by an individual present on the street captured Earlja Dudley and an unidentified male open the hood of a police vehicle. Dudley was then joined by another unidentified male who ignited an object that Dudley was holding. Dudley then placed the flaming object into the engine well of the police vehicle attempting to set the police vehicle on fire. Law enforcement later identified Dockery through analysis of street camera and other video footage and he was arrested on Aug. 5, 2020.

Dudley pleaded guilty to one count of attempting to obstruct, impede, or interfere with law enforcement officers during a civil disorder affecting commerce, on May 19, 2021.

The charge of attempting to interfere with law enforcement officers during a civil disorder to which Dudley has now pleaded guilty pleaded guilty carries a maximum penalty of five years in prison and a maximum fine of $250,000.

Dudley is the fourth of four individuals charged in connection with the May 31, 2020 protest in Trenton, New Jersey to have entered a guilty plea. Defendant Killian F Melecio was sentenced in June of 2021 to a term of 28 months imprisonment and three years supervised release, by U.S. District Judge Brian R. Martinotti. Defendants Kadeem A. Dockery and Justin D. Spry and are scheduled to be sentenced in September and October, 2021.