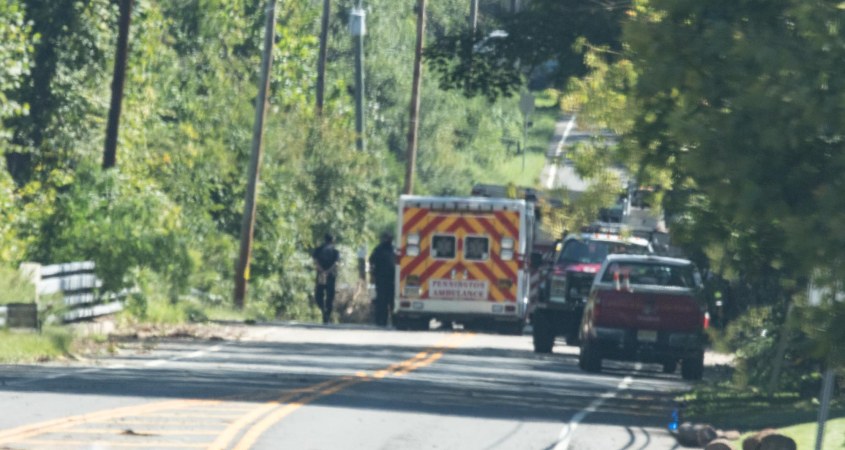 Police attempting rescue become trapped and had to be rescued, officers held onto trees for 2 hours.

HOPEWELL TOWNSHIP, NJ (MERCER)–Last night Hopewell Township was hit hard by Hurricane Ida. Major roadways and many secondary roads were impassable throughout Hopewell Valley. There were many stranded motorists and residents in homes, requiring 50 overnight water rescues and resulting in two fatalities. The names of the deceased are not being released at this time.

A call was received from a stranded motorist on from Route 518, east of Route 31, and Officer James Hoffman responded to attempt a rescue. While struggling to reach the person in need, his vehicle was swept sideways and was rapidly lifted by the rising water of Stony Brook. Very quickly he realized he needed to get out of the car, but the door would not open due to the pressure of the water. He removed the gear he was wearing and was able to escape the vehicle through the window. Finding himself in deep, flowing water, Officer Hoffman traveled about 100 yards and was finally able to grab onto a tree. He held on while the powerful water continued to rise. In response to Officer Hoffman’s distress, Officers Michael Makwinski and Robert Voorhees attempted to reach him, and quickly found themselves in a similar perilous position. With all three officers in the water, holding on to trees for approximately 2 hours, rescue units from all over the area and the state arrived to provide aid. The three officers were rescued by the efforts of the swift water rescue teams from the Union Titusville Fire Company, the Lawrenceville Fire Company and the Hamilton Fire Department. Two officers were transported to the hospital, examined and released. They were wet and exhausted, but otherwise unharmed. Police Director Bob Karmazin said, “We easily could have lost three officers last night.”

You can read last night’s breaking news story here: BREAKING: “Miracle In Mercer County” As 3 Police Officers Rescued After Being Swept Away By Floods

Trenton Evacuates “The Island” In Preparation Of Anticipated Flooding

BREAKING: “Miracle In Mercer County” As 3 Police Officers Rescued After Being Swept Away By Floods