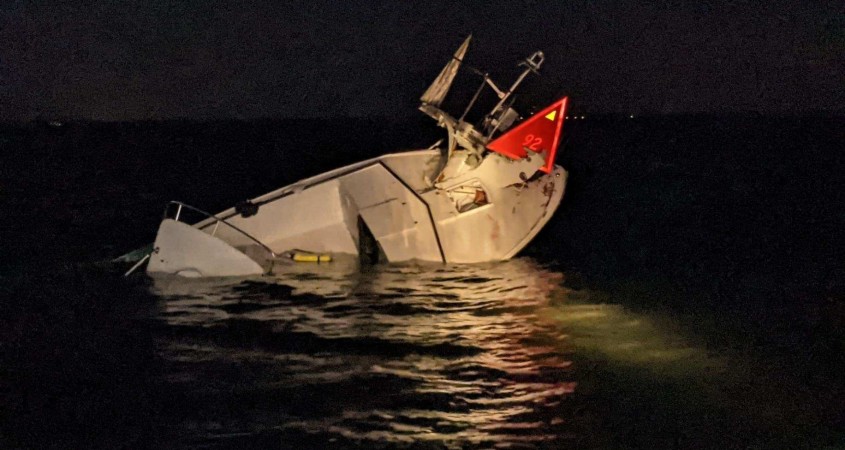 Watchstanders at the Coast Guard Sector Delaware Bay Command Center received a call from a good Samaritan at 12:18 a.m., stating he overheard a large crash and several calls for help in the vicinity of Ham Island.

Once on scene at approximately 12:32 a.m, the Station Beach Haven boatcrew, and the Beach Haven Volunteer Fire Department jet ski crews were able to successfully rescue all six boaters from the water. They had all sustained several injuries from the crash.

The boaters were safely taken back to shore where local emergency medical services personnel transported them to various local hospitals.

Sector Delaware Bay issued a safety marine information broadcast to mariners to be aware of potential debris in the area from the crash.

Coast Guard crews will be actively working to fix the aid to navigation.

LONG BEACH TOWNSHIP, NJ (OCEAN)–The crash occurred last evening at approximately 11:58 p.m. in the Little Egg Harbor in Long Beach Township, Ocean County.  Preliminary information indicates that a 25-foot Bertram Vessel struck Intercoastal Waterway marker 92.  The vessel sustained disabling damage and all six occupants were ejected into the harbor.  Two occupants were airlifted to Atlanticare Regional Medical Center and the remaining four occupants were transported by ambulance to Southern Ocean Medical Center.  One occupant is in critical but stable condition, and the other five occupants are in stable condition.  The crash remains under investigation.

LONG BEACH TOWNSHIP, NJ (OCEAN)–MidJersey.News is following reports of a serious boat crash that happened around 12:30 a.m. off of Hideaway Drive in Long Beach Township. Numerous fire and EMS departments were sent to the scene.

Two medical helicopters were called to the scene along with the U.S. Coast Guard. Initial reports are that one boat was involved and unconfirmed reports of six patients, and two were missing. A Ocean County Fire Coordinator was called and a command post was set up at the Beach Haven Park Yacht Club. Around 1:23 a.m. all persons were accounted for. The NJ State Police accident investigation team was notified.

Medivac from Hackensack Meridian Health AirMed landed at 1:38 a.m. at landing zone in Ship Bottom/Surf City at the park behind Ethel A. Jacobsen Elementary School