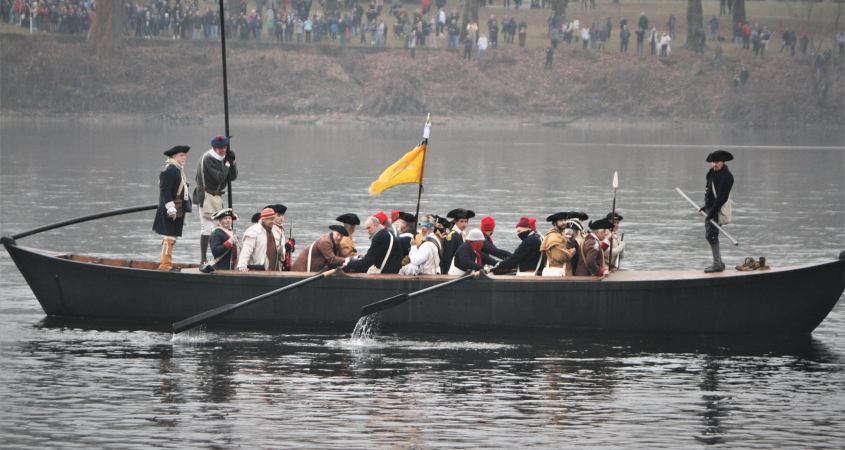 HOPEWELL TOWNSHIP, NJ (MERCER)–On December 25, 1776, General George Washington and more than 2,000 troops crossed the Delaware River under the cover of night, amid a Nor’easter. After crossing to New Jersey, the battles that took place over the next ten days turned the tide of the Revolution. Each year, Washington Crossing Historic Park (PA) hosts a reenactment of Washington’s crossing on Christmas Day.

Today’s reenactment was held at 1:00 p.m. Photos below by: Brian McCarthy, OnScene News

Update: 2 people succumbed to injuries in the fire as reported Mayor Reed Gusciora

TRENTON, NJ (MERCER)–Christmas was ruined for several families when flames raced through a row of homes in the 200 block of Rusling Street, near Anderson Street, before dawn today (Dec. 25). The three-alarm blaze was fought by city firefighters, with mutual aid at the scene from Hamilton and Bordentown City, and it came just hours after the Trenton Fire Department tackled a two-alarm warehouse fire on South Clinton Avenue. It was about 3:30 a.m. when multiple 911 calls were received reporting a fire at 221 Rusling Street. Firefighters arrived to find the home engulfed in flames, with fire having already spread to several adjacent homes. The second and third alarms were sounded in quick succession as firefighters put multiple hoselines in service and tapped multiple hydrants in the neighborhood to supply water for the firefighting effort. It appeared that at least five homes were affected by the blaze.

Trenton Mayor Reed Gusciora stated in a Facebook post from the scene this morning, “6 house fire in Chambersburg in the early morning. Families displaced on Christmas. Fire under investigation but a reminder to not overload circuits, watch space heaters carefully, have a fire escape plan. We pray for the families and any persons so far unaccounted for. 2 people succumbed to injuries in the fire. God bless the families in their time of need. Thanks to Trenton Ladder Companies coming out to scene, EMS, Trenton PD, and County Fire officials. The Red Cross is being called out to assist the families.”

TRENTON, NJ (MERCER)–City firefighters spent Christmas Eve battling a two-alarm warehouse blaze that sent one of their own to the hospital. The fire occurred in a vacant structure at 650 South Clinton Avenue, at the corner of Mott Street, which was once part of the John A. Roebling’s Sons Company. The building is well known to city firefighters as it has been the scene of numerous fires, including several earlier this year. As firefighters were tackling the blaze, a “Mayday” was called over fire department radios, signally a firefighter had become trapped or injured in the building.

It was 10:31 p.m. on Dec. 24 when fire companies were dispatched to the 600 block of South Clinton Avenue following a report of smoke issuing from a vacant structure opposite the Roebling Market shopping center. Firefighters assigned to Engine 3 quickly arrived and confirmed there was heavy smoke pouring from the old Roebling building. The “All Hands” radio signal for a working fire was transmitted and additional fire companies were dispatched. Firefighters encountered heavy smoke and fire conditions inside the building and a second alarm was requested at 10:50 p.m.

The ”Mayday” was called about 11:32 p.m. and it was reported that a firefighter was injured on the first floor. Other firefighters quickly carried their injured comrade outside and passed him to waiting EMTs from Trenton Emergency Medical Service and Lawrence Township Emergency Medical Service. The firefighter, who appeared conscious and alert at the scene, was rushed by ambulance to a city hospital. The exact nature and extent of his injuries was not immediately known.

The blaze was officially placed under control at 12:05 a.m. Christmas morning, and firefighters remained on the scene for several more hours dousing hot spots and assisting investigators from Trenton Police and the Mercer County Prosecutors Office.

Signal 22, the city’s volunteer police and fire canteen service, responded to provide weary firefighters with drinks and other refreshments.