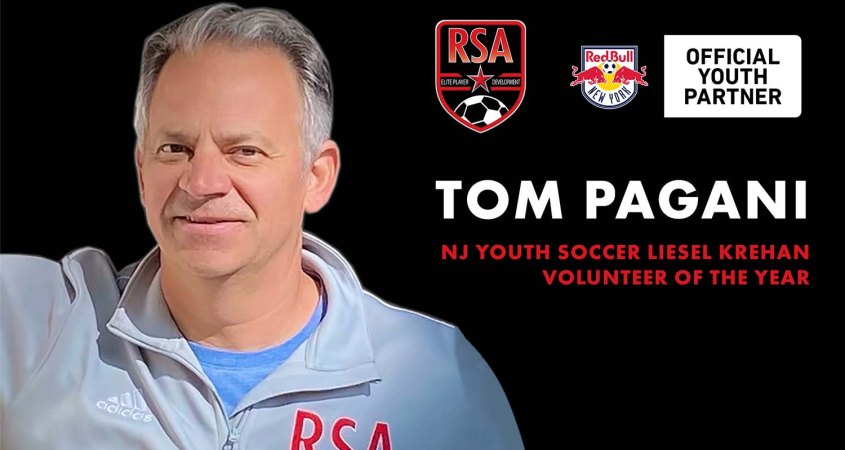 ROBBINSVILLE, NJ (MERCER)–New Jersey Youth Soccer has announced that former RSA Soccer President Tom Pagani is being honored as a 2021 NJYS Liesel Krehan Volunteer of the Year. A lifelong member of the New Jersey soccer community, Pagani tragically passed away in late 2021, but his legacy is one that continues to have a tremendous impact throughout RSA and the youth soccer landscape at large.

“Tom Pagani has left behind a legacy at RSA that few will ever reach,” said Patrick Fuentes, New York Red Bulls Regional Coordinator. “The tireless hours of work and passion towards RSA has helped to inspire a generation of players and volunteers to carry on his legacy.”

During his tenure as RSA President, Pagani sought to advance the Robbinsville-based club to new heights. He was a selfless leader who allowed the experience and expertise of others to take center stage in order to help the club grow. In the fall of 2021, RSA reached its highest membership in years due to his incredible guidance and countless hours of work.

Pagani could most often be found at the soccer fields, whether it was helping to organize the field setup, remedy any problems that should arise or simply to watch the teams at the club play. In addition to his tireless work at RSA, Pagani fostered various relationships throughout the state to assist in the development of the game in Robbinsville and the surrounding region. Among those connections included a partnership with the New York Red Bulls to provide coaching for players at RSA and allowing New Jersey ODP to use fields for ODP events. Additionally, Pagani provided fields and resources for Mooch Soccer, a non-profit program for inner city youth, so they could have a home for training and games.

The NJYS Liesel Krehan Volunteer of the Year Award is presented to an individual or individuals who serve as a great role model to the soccer community while also demonstrating a willingness to promote the game through their actions and individual character. Along with Pagani, Bill Smith of Toms River Independent Club was also acknowledged with the award this year by NJ Youth Soccer.

RSA Soccer has opened its spring tryouts process, and registration is now open. RSA is an official New York Red Bulls Youth Partner, and all player evaluations are led by our professional Red Bulls Coaching Staff. Tryouts open on March 30th and run through the week of April 8th. Learn more.