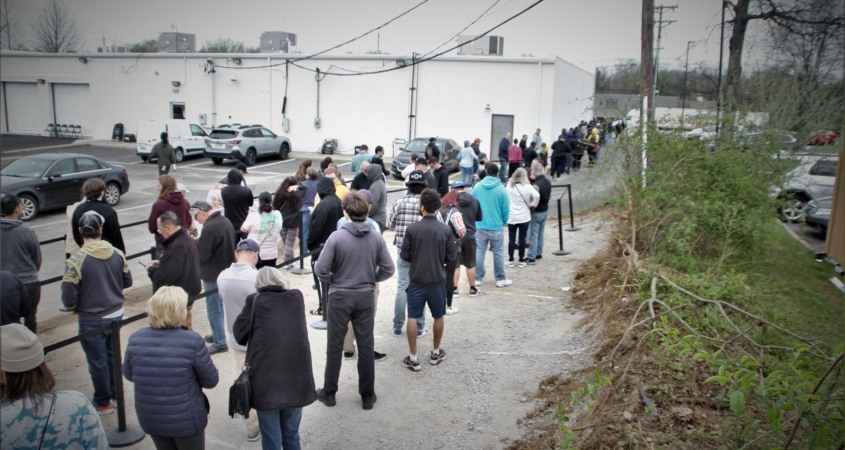 Some customers waited in line for over 2+ hours on the first day of legal sales.

LAWRENCE TOWNSHIP, NJ (MERCER)–Customers waited in lines as long as the DMV was during Covid for their first fully legal recreational cannabis sales that started today on April 21, 2022. Customers told MidJersey.News that some were waiting in long lines for over 2+ hours at Zenleaf Dispensary in Lawrenceville as lines wrapped around the building.

“Congratulations,” Murphy told officials and staff members as he walked around Zen Leaf in Elizabeth, one of 12 locations that opened for adults 21 and over to buy weed legally.

Murphy got applause from people in line as he entered the facility, five years after he campaigned on legalizing marijuana. He was joined on the tour by state Senate President Nicholas Scutari, D-Union, state Assembly Speaker Craig Coughlin, D-Middlesex, and Elizabeth Mayor J. Christian Bollwage.

Murphy asked Coughlin: “You trying anything?”

The governor noted this week marijuana is “not my thing” and he prefers Scotch.

“Congratulations,” Murphy said. “We couldn’t have done it without you.”

“Thanks for the help,” Scutari said.

Zen Leaf General Manager Sonny Achrekar told Murphy there are separate lines for recreational and medical customers. He also said the dispensary opens for one hour each at the start and end of the day for patients only.

A staff member showed Murphy and the officials a bottle of sour watermelon gummies that cost $80 a bottle.

Cashier was Israel DeJesus told Murphy that sales Thursday are expected to be “off the charts” and they have extra staff coming in.

“Thanks to you, man, everything is possible,” DeJesus told the governor. “This is what everyone is waiting for.”

Long lines wrap around the building at Zenleaf, Lawrenceville:

Find a legal licensed dispensary at the following link: