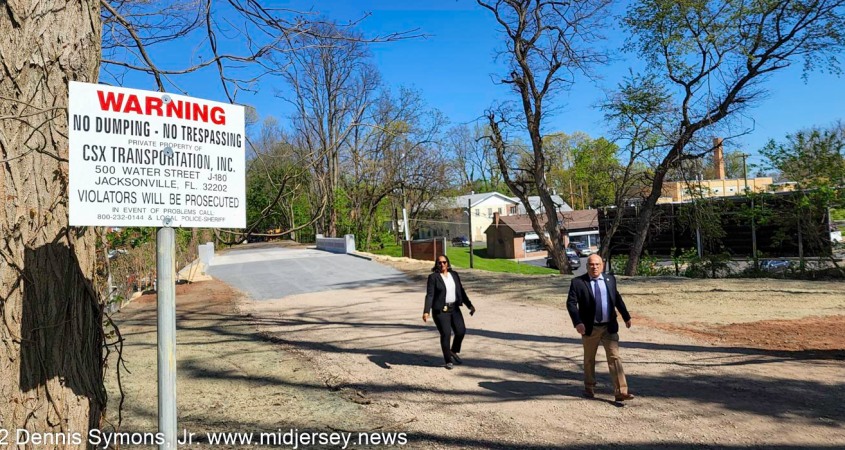 TRENTON, NJ (MERCER)–An abandoned railroad bridge that crosses over Parkside Avenue was replaced and reopened this morning. It is dubbed the “Bridge to Nowhere” by some locals because legally the property surrounding the bridge is owned by CSX Corporation and is marked by many “No Trespassing” signs throughout the area. The construction project shut down Parkside Avenue for 6-Months from November 1 to April 29, 2022, and the reopening was celebrated by City and County Officials with a ribbon cutting ceremony this morning. The price tag for the project was $1,885,277.00 County Officials stated that they hope the abandoned rail line will become a park run by Mercer County.

If the City or County can gain legal ownership of the property, and convert it to a park, the trail would extend about 900 feet to the North from Parkside to Hillcrest Avenue. To the south the trail could extend 3,700 feet to the back of the West Ward Recreation Center on Prospect Street. It is less than a mile, a total of 0.87 miles of trail could be the potential for a future trail. The trail could not proceed into Ewing Township since that portion of the rail line was sold off years ago and divided into lots, currently has 20 houses on the old section of line.

The bridge is well known as a party area for drugs, drinking and smoking, and several have stated that things have been thrown off that bridge at their vehicles. There have been several shootings and murders in the neighborhoods near and around the abandoned rail property. A quick walk down the trail showed an abandoned mattress, garbage, discarded liquor and beer bottles and other junk. People were seen using the clearly marked private property and disregarding the “No Trespassing” signage.

Before an enthusiastic crowd, County Executive Brian M. Hughes and the Mercer County Department of Transportation and Infrastructure today reopened the bridge carrying an abandoned railroad trail over Parkside Avenue in the City of Trenton. Officially known as Bridge #180.1, the structure is located between Oak Lane and Oakland Street. The project was completed under budget, announced Mr. Hughes.

The old bridge was a concrete encased steel girder bridge and carries above it an abandoned railroad trail and pedestrian route. The structure was in poor condition, extremely deteriorated and posed a hazard due to the potential of falling concrete debris, and neighbors described it as “dangerous” and an “eyesore in the community.”

“With this project, Mercer County is taking the long view with an eye toward the future, and in this case it is to preserve mobility options for a disadvantaged community,” Mr. Hughes, who as a child lived not far from the project site, said.  “Our hope is that with our partners in Trenton, we will see development of this rail trail, and replacing this structure is our commitment to that future.”

The pedestrian bridge is intended to carry a multipurpose trail on the right of way of the abandoned CSX “Trenton Cutoff,” which formerly connected the Northeast Corridor Line to the West Trenton Line. Through inspection of aerial photos, county planners know the trail sees considerable existing use of the alignment as a footpath, from Edgemere Avenue, near Trenton’s West Ward Senior and Recreation Centers on Prospect Street, westward to commercial nodes on Parkside and Maple Avenues, including across the existing bridge. With most cross streets dead-ended at the former railroad, the footpath provides a significant local travel-way to access the wider roadway network and commercial resources.

As part of the bridge replacement, Mercer County groomed a section of the trail, added trees to the embankments and removed trash and downed trees.

“The City of Trenton is appreciative of the county’s efforts, and we envision the walking trail as a way for people to get to our recreation centers and beyond,” said Trenton Mayor Reed Gusciora.

Toward that effort, the county has mapped out the extent of a feasible, uninterrupted alignment that could be built in the near future, and with the cooperation of the Christina Seix Academy, which purchased part of the right of way to expand its campus, the trail could continue to the Ewing Town Center development.

This trail alignment is included in the City of Trenton’s Master Plan https://www.trenton250.org/actions/rails-to-trails-projects as the “Delaware and Bound Brook Rail Trail,” and in 2017, the Trenton City Council formally requested that Mercer County replace the abandoned rail bridge with a pedestrian facility (Resolution #17-533) to support this off-street bicycle and pedestrian connection.  Mercer County Planning Department staff researched right-of-way ownership to demonstrate feasibility of constructing this alignment.

The successful bidder for the project was Rencor Inc. of Somerville, NJ 08876. They submitted a bid price of $1,885,277.00. The contract was approved by the Mercer County Board of Commissioners on October 7, 2021.