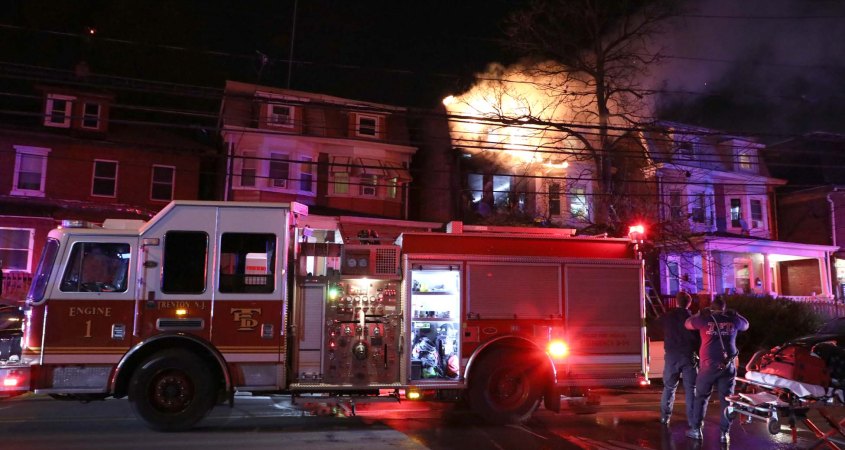 TRENTON, NJ (MERCER)–Both sides of a Pennington Avenue duplex were damaged this evening (Friday, April 29) by a fire that sent one firefighter to a local hospital.

It was shortly after 9:30 p.m. when the Trenton communications center began to receive multiple 911 calls reporting that the house at 520 Pennington Avenue was on fire. Engines 1, 8 and 10, Ladder 1, Rescue 1 and the North Battalion were dispatched. They arrived to find heavy fire showing from the second floor of #520 (the left side of the 2.5-story duplex) with flames extending to the third floor and into the right side of the structure (#518).

The ”All Hands” signal for a working fire was transmitted and additional units – Engine 9, Ladder 4, Special Services 1 and the South Battalion – were dispatched. Firefighters mounted an aggressive interior attack.

At 8:57 p.m. the incident command reported that firefighters had four hoselines stretched, three of which were flowing water, and that the bulk of the fire had been knocked down. Ten minutes later the chief reported that all visible fire had been extinguished but that crews were still performing overhaul to locate any hidden hot spots.

Sometime later, Trenton Emergency Medical Services reported that they were transporting one firefighter from the scene to a local hospital, reportedly for treatment of chest pains.

The American Red Cross was contacted to provide temporary shelter for displaced residents. The cause of the blaze is under investigation by Trenton fire and police officials, as well as the Mercer County Prosecutor’s Office.