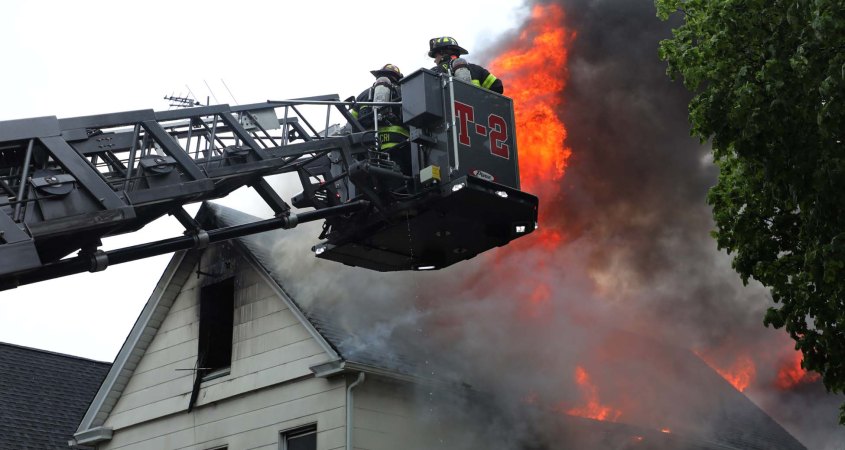 PERTH AMBOY (Middlesex County) – Two firefighters were injured battling a stubborn two-alarm blaze that destroyed one home and damaged another on Saturday (May 7).

The following details were released by the Perth Amboy Fire Department on their Facebook page:

On 5/07/22 at 1255 hours, the PAFD was dispatched to 189 William Street for a reported fire. Upon arrival, heavy smoke was found coming from all floors of the 2.5 story residential two-family dwelling and a second alarm was transmitted. Crews found heavy fire in the basement which had extended up to the attic via the balloon frame bays. Multiple hoselines were stretched to attack the fire while searches were completed and all occupants were accounted for. Due to the heavy fire conditions, all crews were withdrawn and operations went defensive. Truck 2’s platform operated on the fire building as the B Exposure was protected. Once the fire was knocked down, crews re-entered to overhaul and put out all remaining hot spots. There were no civilian injuries and there were two non-life threatening firefighter injuries. Both were taken to area hospitals for treatment. Six occupants were displaced by the fire, which is under investigation by the PAFD Fire Investigation Unit. The fire building was a total loss and there was minor damage to 187 William St. City units on scene were E-1, E-2, E-3, T-2, T-3, R-1, C-1, C-2, C-4, C-5, C-9 & C-11. Mutual aid units that assisted on scene were Hopelawn R-8, Sayreville E-3 and Woodbridge Truck 1-2-6. Keasbey Truck 4-2-4 and South Amboy E-9 covered the city during the incident.