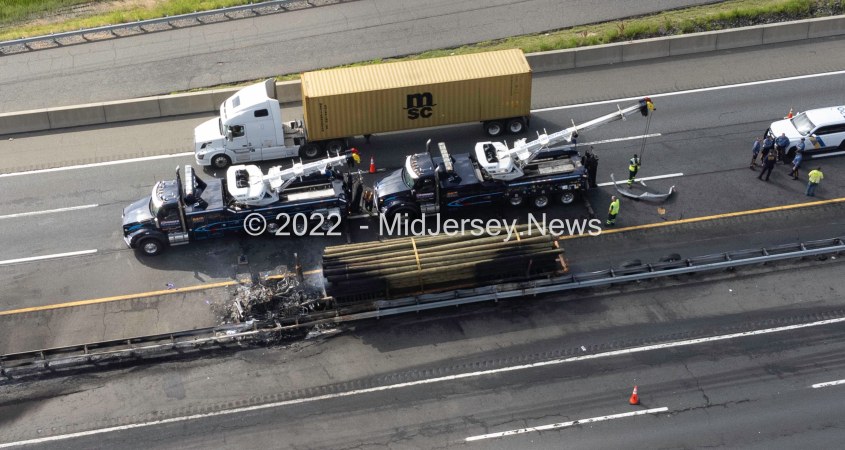 The preliminary investigation indicates that a tractor trailer traveling north struck a disabled Ford Ecosport in the right lane, which was unoccupied and disabled from a previous accident. The tractor-trailer then went off the road to the right, struck the guardrail and entered the outer roadway, where it struck a pedestrian standing in the left shoulder and became engulfed.

The pedestrian, William Beczo, 47, of Bensalem, PA sustained fatal injuries. The driver of the tractor-trailer was not injured. The accident remains under investigation by the New Jersey State Police.

CHESTERFIELD TOWNSHIP, NJ (BURLINGTON)–At 3:40 a.m. June 17, 2022, the Bordentown Township Fire Department and Robbinsville Township Fire Departments were dispatched to a vehicle fire on the New Jersey Turnpike. The accident was reported north of Exit 7 near the Burlington – Mercer County Line. Responding units were advised that this fire was involving a serious accident and additional EMS units were added to the call. First arriving units reported an accident and a well involved truck fire.

Unofficially, from photos of the scene, the crash scene appears to be about 1/4 mile long. It is unclear exactly what happened, but it appears that there was a serious collision between a truck and a couple of smaller vehicles. After the initial collision with smaller vehicles, it appeared that the truck crashed through the guardrail between the inner and outer lanes and came to rest, stopping about 1,000 feet later and was completely consumed in fire. The truck appeared to be carrying utility poles and the utility poles were smoldering most of the day until the truck was towed away.

* Update: New Jersey State Police indicate a pedestrian, William Beczo, 47, of Bensalem, PA sustained fatal injuries. (See update above) — From other reports it was believed that Beczo stopped to help at the accident and then was killed as the tractor-trailer went though the guardrail he was standing on the other side of. MidJersey.News has reached out for a clarification of why the pedestrian was there. *

Send photos into MidJersey.News by using the contact form and we will send you the email address to send them. The photos must be your original work and not taken by someone else or to be used without permission from the artist. Gas is +/- $5.00 a gallon and we can’t get to as many things as we would like to so all the help we can get is appreciated. This is a volunteer news site run by journalists as a public service to cover areas of NJ where traditional news agencies ignored.

Support us by buying us coffee here: https://ko-fi.com/midjerseynews