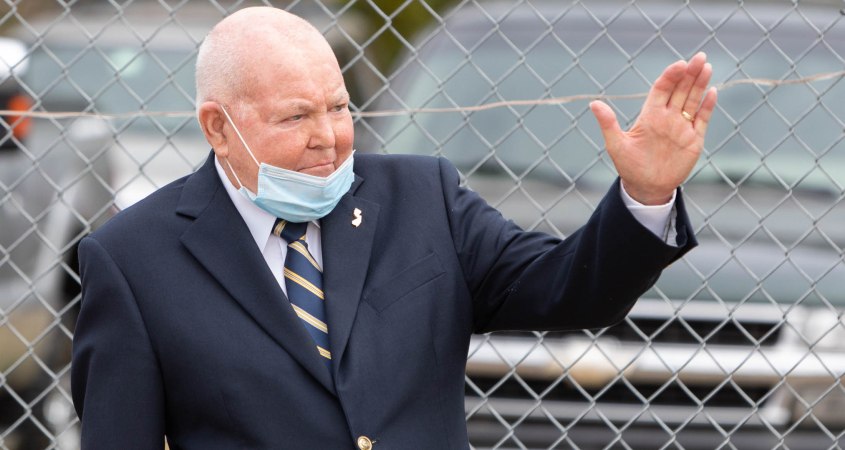 PLUMSTED TOWNSHIP, NJ (OCEAN) NEW EGYPT–It is with great regret and profound sadness that we, the staff of the esteemed Assemblyman Ron Dancer, must inform you of his passing. He left this world peacefully with his beloved wife by his side.

Ron often expressed gratitude by saying, “I am blessed.” May God continue to bless Ron Dancer and bless his grieving family. May he rest in eternal peace.

Please direct questions to his legislative office at asmdancer@njleg.org

You may also leave a private message of condolence or a fond memory of the Assemblyman at his website www.AssemblymanDancer.com

Ronald S. Dancer served his local community and state for over 30 years as a volunteer, adviser, leader, and representative. He was known by his friends and neighbors as the man who got things done. As the people’s representative, Ron fought for the interests of the 12th Legislative District and served with compassion for all.

Ron grew up in New Egypt, the beautiful town at the very center of New Jersey. The son of the late Hall of Fame Harness Horse Racing Driver Stanley Dancer, Ron was a horseman, trainer, and driver. He professionally raced and trained horses from 1968 through 1998.

Ron attended the Peddie School in Hightstown and later, the Edward J. Blaustein School of Planning and Public Policy at Rutgers University. In between, Ron served in the United States Army from 1969-1971.

First elected as mayor in 1989, Ron served Plumsted Township through 2011. He continued as the Township’s Honorary Business Administrator from 2012 to 2017.

Ron served on the New Jersey Horse Racing Commission from 1999 to 2002 and the New Jersey Department of Agriculture Sire Stakes Board from 1982 until 2002.

Ron most notably served as a member of the General Assembly from 2002 to 2022. He most recently was the Assistant Republican Leader. Ron’s successful public policy initiatives were furthered by his positions on a number of assembly committees. He served on the Agriculture and Food Security; Military and Veterans’ Affairs; and Tourism, Gaming and the Arts committees.

Ron is survived by his wife, Brenda, two children, and three grandchildren.

“Tammy and I are deeply saddened to learn of the passing of Assemblyman Ron Dancer. True to his roots in one of New Jersey’s storied equestrian racing families, in public service he was a work horse not a show horse. A proud veteran with a quiet demeanor and humble nature, Ron built friendships across the aisle. His focus on New Jersey’s agricultural, horse-racing, and tourist industries, and our honored military veterans, leaves a lasting legacy. Our state flags will be lowered to half-staff in his honor and memory. His wife, Brenda, their children and grandchildren, and the entire Dancer family are in all of our thoughts this weekend.” — Governor Phil Murphy

“Ron Dancer was a tireless public servant who served his country in the Army before becoming a highly respected and enormously popular mayor of Plumsted and assemblyman for the 12th Legislative District. A great friend to many and true civic leader, Ron was as gracious and considerate as he was hard working and effective. I cannot think of anyone who loved Plumsted and personified the township more than Ron Dancer.

“His trade-mark energetic leadership as a state legislator is marked by many issues he took head-on, especially advocating for the equestrian community, protecting veterans’ concerns on the Military and Veterans’ Affairs Committee, and defending the unborn on pro-life matters before the Assembly. He was a one-of-a-kind public servant whom I always greatly admired, and I am proud to have known him and called him my good friend.

“Marie’s and my thoughts and prayers are with his wife Brenda and his loved ones as we celebrate his life of service and mourn his passing.”

Assembly Republicans today are mourning the death of their colleague, Assemblyman Ronald Dancer. He was 73.

A New Egypt native, Dancer was serving as Plumsted Township mayor in 2002 when district Republicans tapped him to fill a vacancy created by Assemblyman Melvin Cottrell’s passing. He most recently served on the Assembly agriculture and food security, military and veterans’ affairs, and tourism, gaming and the arts committees.

“Ron’s 20 years in the Assembly are marked not only by his tireless efforts to serve his constituents, even during his illness, but his willingness to work across party lines to accomplish what he believed was best for all New Jerseyans,” Assembly Minority Leader John DiMaio (R-Warren) said. “He was a true patriot, statesman, gentleman, and my good friend. He will be sorely missed. My prayers and those of our conference are with his beloved wife Brenda and their family.”

Dancer served in the United States Army from 1969-1971. At home, he professionally raced and trained horses for 30 years, following in the footsteps of his father Stanley Dancer, the Hall of Fame Harness Horse Racing driver.

Dancer has been a tireless advocate for the farming community, the horse racing industry and taxpayers. Notable legislation enacted into law include: allowing for special occasion events on preserved farms; providing funding to increase horse racing purses; and allowing municipalities to establish programs to encourage local shopping through property tax rewards.

“No service member who ever stepped foot in New Jersey had a greater ally than Ron. His most powerful pieces of legislation honored and protected those who selflessly serve their fellow countrymen.” DiMaio added. “Likewise, his passion for agriculture and horse racing is evident in the bills he sponsored to strengthen and safeguard those industries.”

“Ron has left us with a legacy that serves as a beacon for public servants now and New Jersey leaders of the future,’ DiMaio concluded. “Ultimately, it’s not about Republican or Democrat; it’s about the people we serve. Ron served the people well.”

Assembly Speaker Craig J. Coughlin (D-Middlesex) issued the following statement Saturday on the passing of Republican Assemblyman Ronald Dancer from the 12th legislative district: “I am saddened to learn of the loss of a true gentleman in New Jersey politics. In his two decades of public service in the Assembly, Ron Dancer was always someone who strived to work across the aisle. “A veteran himself, he leaves behind a legacy of advocacy on behalf of our military men and women. He was also a champion for New Jersey’s agricultural and horse racing communities, and contributed greatly to innovative expansions of our state’s tourism – most recently being the sponsor of legislation that will widen economic opportunity for our wineries and farms.