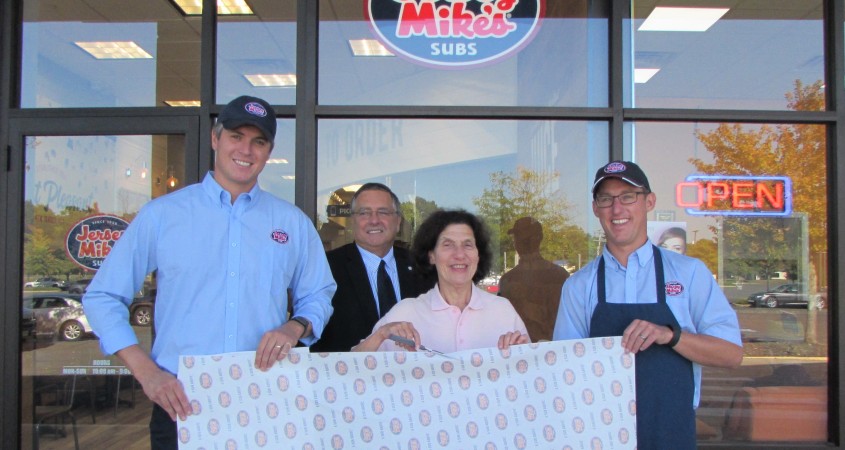 EAST WINDSOR TOWNSHIP, NJ (MERCER)– Mayor Janice S. Mironov and Council Member John Zoller joined Co-Owners Evan Mayer and Gerrit Curran and staff for the grand opening of Jersey Mike’s Subs in the East Windsor Town Center Plaza, anchored by ShopRite and Picture Show movie theater, on Route 130 North.  Evan Mayer, who began his career with Jersey Mike’s in 1998, and his business partner Gerrit Curran currently own and operate two other Jersey Mike’s franchise locations, including Princeton and Hamilton.  The new location in East Windsor has provided the owners the opportunity to bring the country’s #1 Most Admired Fast-casual Brand according to QSR’s 2019 Reader’s Choice Awards to local residents.

Since 2011, Jersey Mike’s locations throughout the country have raised more than $67 million for worthy local charities. In 2022, the company’s 12th Annual Jersey Mike’s Month of Giving in March raised $20 million for the 2022 Special Olympics USA Games and Special Olympics State Programs.  Locally, to celebrate their grand opening, the owners organized a fundraiser in support of the East Windsor Regional School District Hightstown High School Athletics program.

Founded in 1956 in Point Pleasant, New Jersey, Jersey Mike’s Subs is the pioneer of the submarine sandwich, with over 2,000 restaurants open or under development nationwide.  According to their website, Jersey Mike’s strives to serve their customers quality meats and cheeses which are sliced on the spot, served on in-store baked bread.  They are also known for exceptional customer service and giving back to the local community.