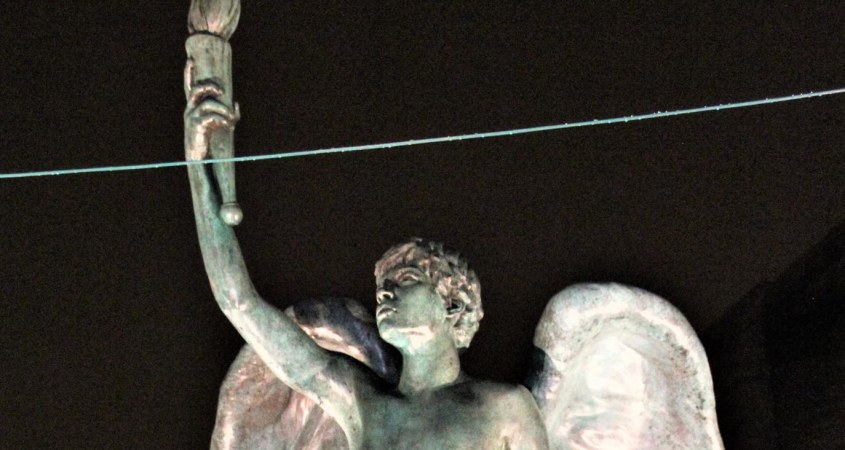 TRENTON, NJ (MERCER)–Trenton’s “Angel of Faith” monument was reported stolen from St. Michaels at the corner of North Warren & Perry Steets sometime the weekend of May 12, 2022. Someone used a saw to cut the statue down by its legs and only the feet remain where the statue once stood.

On May 19, 2022 the Angel of Hope statue was recovered from a scrap yard in Philadelphia, Pennsylvania. Trenton Police said from video surveillance footage obtained by the NJSP, Property Crimes Unit Detective Sergeant Kurfuss, Detectives Feliciano, Furman, Wood, Villanueva and Technical Services Unit Detective Michael Nazario of the Trenton Police Department were able to track down the vehicle used and individuals responsible for the theft. Two suspects were identified and Charged with the offense.

Since the recovery Seward Johnson Atelier has been working hard to repair and restore the Angel of Faith statue. It was replaced back in its original spot and unveiled during last night’s 2022 Holiday Celebration.

“This was the miracle on Perry Street,” said Mayor Gusciora.  “Our police tracked down the statue in a scrap yard in Philadelphia and brought the pieces to Johnson Atelier the original foundry, where they returned it to its natural beauty. This iconic statute greets visitors as they enter our city and represents the hope and aspirations of the Capital City.”

The Angel of Faith was erected by Mayor Donal J. Connolly, Citizens Committee 1947-1959 and the City of Trenton. The monument was dedicated to the people of Trenton on October 27, 1986.

Above photos by: Brian McCarthy