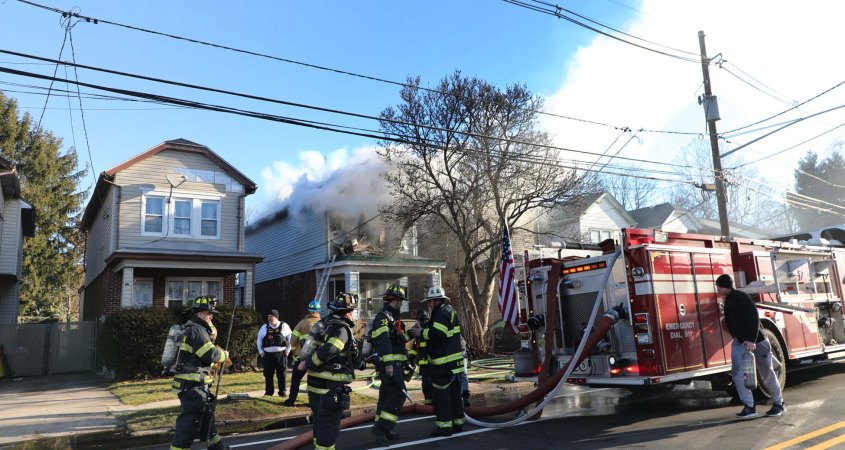 EWING TOWNSHIP (MERCER)– One person was badly injured in a fire that gutted a home near the township’s border with Trenton this morning.

The injured individual, whose identity was not released by authorities but who is believed to be a resident of the home, was rushed by Ewing Township EMS to Capital Health Regional Medical Center in Trenton. The person was then reportedly transferred by medical helicopter to the burn center at Cooperman Barnabas Medical Center in Livingston.

Ewing Township career firefighters and volunteers from the Prospect Heights and West Trenton fire companies were dispatched to the blaze at 210 Parkway Avenue at 9:12 a.m. Two crews of Ewing firefighters were already on the road, returning from a previous false fire alarm activation on Buttonwood Drive, and were able to quickly respond to Parkway Avenue.

With Parkway Avenue forming part of the municipal border between Ewing and Trenton, Trenton Fire Department also sent crews from Engines 1, 8, and 9 and Ladder 1 to the scene to help battle the blaze.

Firefighters worked under the direction of Prospect Heights Fire Co. Chief Doug Brower. The blaze was officially declared under control at 9:48 a.m. The adjacent home at 208 Parkway Avenue sustained some siding damage from radiant heat but was otherwise saved from damage.