On Saturday, May 16, Mondragon and Guzman were burglarizing a vehicle at a Shrewsbury Township residence when they were confronted by the homeowners. During the confrontation, the suspects allegedly brandished a handgun and taser before fleeing. On Saturday, June 6, in Eatontown Borough, the duo sprayed a deliveryman with oleoresin capsicum (pepper) spray and physically assaulted him during a robbery.

Through various investigative means and by using evidence recovered by the Troop “C” CIO and State Police Crime Scene Unit, investigators were able to link Mondragon and Guzman to an additional 100 vehicle burglaries in Monmouth County. On Thursday, October 8, detectives from the Troop “C” CIO, State Police Fugitive Unit, K9 Unit, along with members of the U.S. Marshals Service NY/NJ Task Force located and arrested Mondragon in Long Branch, N.J., and Guzman in Shrewsbury Township, N.J.

Mondragon and Guzman were charged separately by our partnering agencies.

This case is being prosecuted by the Monmouth County Prosecutor’s Office.

Charges are mere accusations, and the accused are presumed innocent until proven guilty. 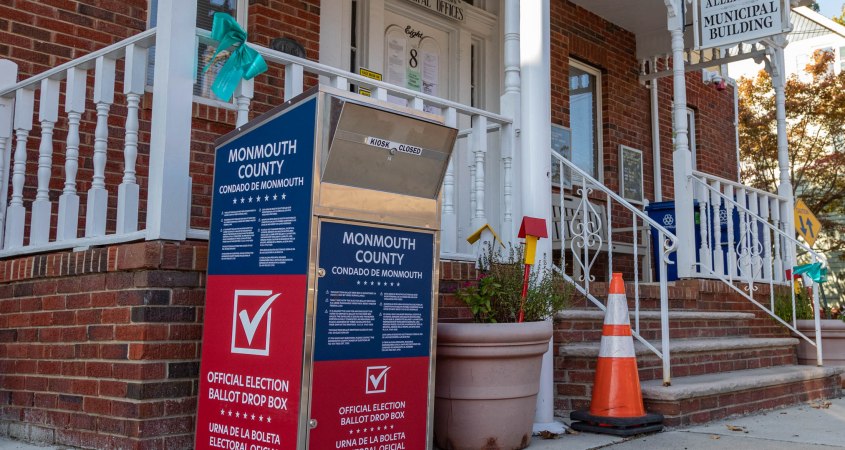 Visit: https://www.monmouthcountyvotes.com/ for the latest voting information in Monmouth County

FREEHOLD, NJ (MONMOUTH)–As you may be aware, this year’s November General Election in New Jersey is being conducted primarily by mail-in ballots, per State mandate. On November 3, 2020, Election Day, limited polling locations will be open for voting on paper provisional ballots only, except for disabled voters.

Voters across Monmouth County are receiving their mail-in ballots this week and are encouraged to contact the County Clerk’s Election Office at 732-431-7790, Monday to Friday, 8:30 a.m. to 4:30 p.m., with any questions about the delivery of their ballots.

Due to this unprecedented change in our election process, Monmouth County Clerk Christine Giordano Hanlon has provided a comprehensive webpage on MonmouthCountyVotes.com, explaining this year’s election process.

In addition, our office has provided video tutorials, including an animated step-by-step video informing Monmouth County voters of how to properly complete and return their mail-in ballots. The tutorial also explains how the paper ballots are reviewed and verified by the Monmouth County Board of Elections.

“Our democratic system of government depends on free and fair elections and, as such, election integrity and security is important to all of us,” said County Prosecutor Christopher J. Gramiccioni and County Clerk Christine Giordano Hanlon. “For these reasons, our offices are working together to further safeguard the electoral process.”

Anthony Clark, 42, of Philadelphia was sentenced to a combined 19 years in a New Jersey state prison Wednesday afternoon by Monmouth County Superior Court Judge Ellen Torregrossa-O’Connor. The sentence is subject to the provisions of the “No Early Release Act” (NERA), requiring him to serve 85 percent of the sentence imposed before becoming eligible for release on parole. The sentence follows his February conviction after a five-week trial on charges of first degree Armed Robbery, third degree Criminal Restraint, second degree Possession of a Handgun for an Unlawful Purpose, second degree Theft of Movable Property, and third degree Receiving Stolen Property.

At trial it was revealed Clark and four co-conspirators traveled from Philadelphia to Ocean Township on Sept. 6, 2016, in a stolen motor vehicle with plans to rob the AT&T store located on Route 35. Clark, posing as a customer, entered the store first and goaded a store employee into the far corner of the store under the guise of purchasing a cellphone. Shortly thereafter, three of his co-conspirators entered the store and forced the two store employees into a back inventory room at gunpoint. The store employees were forced to their knees and bound about their hands and feet with zip ties. While his co-conspirators proceeded to zip tie the staff members at gunpoint, Clark kept watch in the front of the store while communicating with another co-conspirator who was parked across the highway. Clark proceeded to fill numerous laundry bags with store merchandise, which were eventually loaded into the stolen motor vehicle. In total, Clark and his co-conspirators made off with over $130,000 worth of store merchandise.

Clark is represented by Allison Friedman, Esq. and Anthony Cherry, Esq., of Freehold.

A current list of Vote-By-Mail Drop Box locations for Monmouth County can be found here.

Pursuant to State law, the November 3, 2020 General Election will be conducted primarily by Mail-In Ballot in New Jersey.

If you wish to place your Mail-In Ballot in a secure drop box, below are the locations throughout the County which will be available starting the week of September 15. Addresses in the list below are clickable and will bring up Google Maps.

Voters can drop their voted Mail-In Ballot into these Board of Elections Drop Boxes anywhere in the County up until 8 p.m. on November 3, 2020. You do not have to be a resident of the town where the drop box is located. Be advised that these drop boxes are under video surveillance and are monitored by the Monmouth County Board of Elections, which can be reached at 732-431-7802.

For more information about the General Election process, click here.

FREEHOLD, NJ (MONMOUTH)–A former Ocean Township Police officer was charged with Theft by Deception and two counts of Forgery on Thursday in connection with a forged document he submitted to secure a  $425,000 loan to purchase a property on Borrie Avenue in Brielle in July 2019.  He was also charged with additional counts of Theft and Forgery in connection with keeping a tenant’s $4,200 security deposit with respect to a different property he owned on Fisk Avenue in Brielle and attempting to justify retaining the security deposit using a forged document, announced Monmouth County Prosecutor Christopher J. Gramiccioni.

An investigation by the Monmouth County Prosecutor’s Office revealed that Cole, who buys, flips and rents real estate, forged a letter from his former matrimonial attorney in order to falsely establish a judgment she had against him for unpaid attorney’s fees had been satisfied, and Cole submitted this letter to enable his purchase of a property on Borrie Avenue in Brielle.  Cole would have been unable to secure the $425,000 loan to purchase the property if the lender was aware the judgment against Cole was outstanding.  Additional investigation revealed that in addition to the victim identified in January of this year, Cole retained the $4,200 security deposit from his tenants at a property on Fisk Avenue.  He attempted to justify retaining the security deposit by claiming the tenants owed money in unpaid utility bills on the property and providing them with a forged bill from New Jersey Natural Gas which falsely indicated they had an outstanding balance.

Cole resigned from his employment with the Ocean Township Police Department earlier this year on the heels of the investigation after the initial set of criminal charges were filed.

“It doesn’t matter if you are a former, current or retired member of law enforcement, you will be held accountable for your actions. Your unlawful or improper actions will be discovered and prosecuted,” said Prosecutor Gramiccioni.

Anyone with information about Cole’s activities is urged to call Detective Sergeant Ryu Washburne at 1-800-533-7443.

The case is being prosecuted by Monmouth County Assistant Prosecutor Melanie Falco, Director of the Office’s Professional Responsibilities and Bias Crimes Unit.

Cole is represented by Steve Nelson, Esq., of Neptune City.

Despite these charges, every defendant is presumed innocent, unless and until found guilty beyond a reasonable doubt, following a trial at which the defendant has all of the trial rights guaranteed by the United States Constitution and State law.

*Update: This tornado warning is no longer in effect.

MONMOUTH COUNTY, NJ–A tornado warning has been issued for the storm over Monmouth County. For the latest radar image, visit https://radar.weather.gov/radar.php?rid=dix&product=NCR&overlay=11101111&loop=no

*Clenbuterol according to Wikipedia is a bronchodilator and in some countries used for asthma. The drug also known by street name “bute” is used by bodybuilders in their “cutting” cycles for weight loss. As of 2011, the World Anti-Doping Agency (WADA) listed Clenbuterol as an anabolic agent*

Ryan Vaccaro, 38, of Ocean Township, pleaded guilty to fourth-degree Possession of a Prescription Legend Drug (Clenbuterol), before Monmouth County Superior Court Judge Lourdes Lucas, as part of a plea agreement with this Office.   During his plea, Vaccaro acknowledged that between May 1, 2018 and Feb. 19, 2019, he was knowingly in possession of five or more dosage units of Clenbuterol and that he did not have a lawful prescription for that substance.

Vaccaro was charged on February 19, 2019 with fourth degree Possession of a Prescription Legend Drug, second degree Possession with Intent to Distribute a Prescription Legend Drug, and second degree Distribution of a Prescription Legend Drug, as a result of an investigation connected to former Deal Police Officer Joseph Ammaturo, who entered a guilty plea last month.   The investigation revealed that Ammaturo obtained three boxes of Astralean Clenbuterol containing approximately 150 pills from Vaccaro and that Ammaturo distributed two of those boxes to other individuals.  The third box was ultimately recovered from Ammaturo’s residence.  Additional Clenbuterol pills were found in Vaccaro’s residence during the execution of a search warrant.

Clenbuterol is a drug used to treat breathing disorders in animals and is not approved for human use by the U.S. Food and Drug Administration.  It is popular among human consumers as a weight loss supplement despite its banned status.

As part of his plea agreement, an order permanently barring Vaccaro from holding public office in New Jersey was entered and signed by Judge Lucas today. The plea agreement also permits Vaccaro to apply to the pre-trial intervention program.

“We will continue to prosecute law enforcement officers who fail to respect their responsibilities to the community and to their colleagues who put their lives on the line each and every day,” Gramiccioni said.

“I am pleased that this case has finally concluded and we as an organization can put this behind us. The Ocean Township Police Department is a highly professional and community-minded organization and we will not let the actions of a former police officer overshadow the great work and dedication by the men and women of this department,” said Ocean Township Police Chief Steven R. Peters.

Sentencing is scheduled for October 9, 2020, at which time Vacarro faces a probationary sentence.

The case has been assigned to Monmouth County Assistant Prosecutor Melanie Falco, Director of the office’s Professional Responsibility and Bias Crimes Unit.

Vaccaro is represented by Richard E. Incremona, Esq., of Freehold.