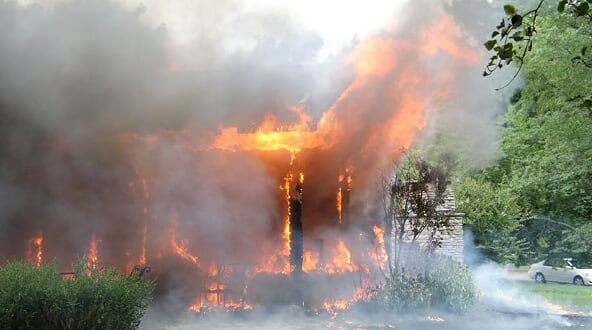 MIDDLETOWN TOWNSHIP, NJ (MONMOUTH)–At 4:38 pm on Friday, August 7, 2020 the Middletown Township Fire Department was dispatched to a back deck fire on a one story structure fire at 97 Stavola Road in the Middletown section of the Township.

Upon arrival MTFD Second Assistant Chief John Waltz declared a reported working structure fire with heavy fire on the back deck with extension into the main structure and requested and additional companies be dispatched for additional firefighters and Rapid Intervention Team support to protect firefighters as they fight the fire.

Chief Waltz directed the first engine to deploy an initial 1 3/4” attack lines to the front door. Search and rescue teams confirmed the structure was unoccupied. The initial attack line was then backed up by two additional 1 ¾” lines which extinguished the fire. 400’ of 5” Large Diameter Hose (LDH) was deployed from the nearest hydrant to deliver water to scene. Thermal imaging cameras were employed to ensure all fire was found and extinguished. Ventilation fans were employed to remove the smoke from the structure.

The building utilities were secured by New Jersey Natural Gas, Jersey Central Power and Light and New Jersey American Water. The fire was called under control by Chief Russell Mount III at 5:10 p.m. All units were cleared from the scene at 7:40 p.m. Approximately 40 members from 5 companies of the Middletown Township Fire Department responded to the call from Navesink, Belford Engine, Community, Middletown Number 1 and River Plaza Hose Fire Companies. The MTFD Air Unit and the Safety Unit responded. Six Emergency Medical Service members from Fairview, Leonardo and Port Monmouth First Aid Squads responded with three ambulances and a rehabilitation unit to provide firefighter rehabilitation and medical services to all firefighters. No firefighter or civilian injuries were reported.