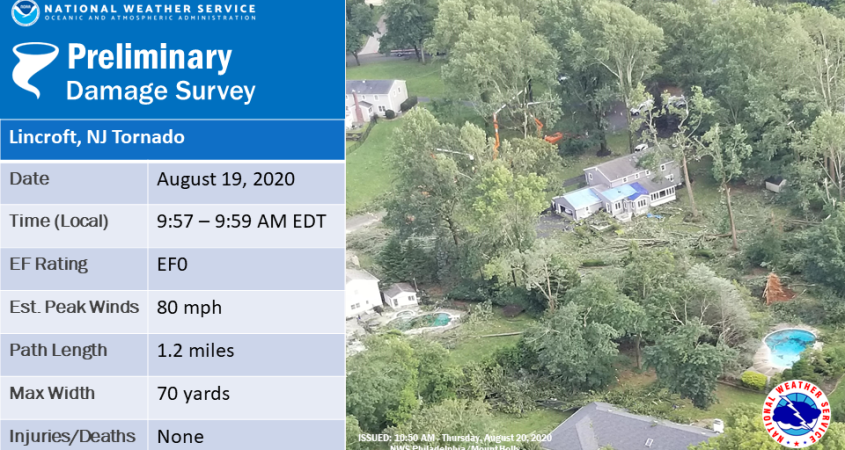 The tornado touched down at Brookdale Community College

MIDDLETOWN, NJ (MONMOUTH)–The National Weather Service Burlington-Mount Holly has confirmed an EF0 tornado that touched down yesterday in Middletown Township, Monmouth County in the Lincroft section of town. The tornado touched down at Brookdale Community College at the baseball field, a set of bleachers were tossed. The tornado then crossed Phalanx Road and into a residential area damaging trees that fell on homes and causing damage. See full NWS statement below:

We have confirmed that an EF0 tornado touched down yesterday morning, August 19, just before 10AM in the Lincroft section of Middletown Township, NJ. See the Public Information Statement for more. https://nwschat.weather.gov/p.php?pid=202008201508-KPHI-NOUS41-PNSPHI #NJwx

FREEHOLD, NJ (MONMOUTH)—A Lakewood man has been arrested and charged for his role in the shooting of a four-year-old Asbury Park girl, announced Monmouth County Prosecutor Christopher J. Gramiccioni.

At approximately 1:35 p.m. on Tuesday, August 18, 2020, a 4-year-old child was shot while sitting outside the family’s home with other family members on Boston Way, a residential village in Asbury Park.  The child was shot in the upper thigh area, breaking the femur bone. Physicians treating the child have deemed the injury as serious, but non-life threatening.

A joint investigation by the Monmouth County Prosecutor’s Office and the Asbury Park Police Department revealed that Jackson rode up on a bicycle and began firing a handgun at several people located outside of an apartment.  The child was just playing outside and was not the intended target.  A second person returned fire at Jackson; however that person has not has not yet been identified.

The Prosecutor’s Office would also like to extend a special thank you to the Lakewood Police Department for their help in this investigation.

The case is being investigated by members of the Monmouth County Prosecutor’s Office and the Asbury Park Police Department. Anyone with information about this case is urged to call Detective William Anton of the Monmouth County Prosecutor’s Office at 1-800-533-7443 or Asbury Park Police Detective Dillon Gourley at 1-732-774-1300.

Anyone who feels the need to remain anonymous but has information about a crime can submit a tip to Monmouth County Crime Stoppers by calling their confidential telephone tip-line at 1-800-671-4400; or by downloading and using the free P3 Tips mobile app (available for iOS and Android – https://www.p3tips.com/community/index.htm).

If convicted of Attempted Murder, Jackson faces up to 20 years in a New Jersey state prison, subject to the provisions of the “No Early Release Act” (NERA) requiring him to serve 85 percent of the sentence imposed before becoming eligible for release on parole. He would also be under parole supervision for five years following his release from state prison.If convicted of Aggravated Assault, the maximum potential sentence is a State Prison term of up to 10 years.  Any sentence imposed for the crime of Aggravated Assault would also be subject to “N.E.R.A.”

If convicted of either Possession of a Weapon for an Unlawful Purpose or Unlawful Possession of a Weapon, the maximum potential sentence is a State Prison term of 10 years, and pursuant to the “Graves Act” there is a mandatory period of parole ineligibility of one half of the custodial sentence imposed, or 42 months, whichever is greater.If convicted of Certain Persons Not to Possess Weapons, he faces up to 10 years in state prison with a five-year mandatory period of parole ineligibility.

Michael Mattina, 54, of Matawan, secretly recorded six female victims, including one sixteen-year-old victim, utilizing a hidden camera located in the bathroom of a residence in Brick Township. Further investigation revealed that Mattina posted the videos of the victims on two adult websites.

Prosecutor Billhimer and Chief Riccio commend the Brick Township Police Department Detective Bureau and the Ocean County Prosecutor’s Office High Tech Crime Unit for their cooperative assistance in this investigation leading to these charges against Mattina.

At approximately 5:57 p.m., Staff Sergeant Paul Rodemann and Trooper I Ryan Koehler were dispatched to the report of a capsized 23-foot boat with six occupants in the Point Pleasant Canal in Point Pleasant Boro, Ocean County. When troopers arrived, they observed five victims struggling to stay afloat in the water. They discovered the sixth victim was still under the water.

As SSGT Rodemann and Tpr. Koehler prepared to enter the water to locate the victim, the victim emerged from under the capsized boat. The troopers then assisted the victims to shore, where they were accounted for and transported back to Point Pleasant Station for a medical evaluation by EMS. There were no reported injuries.

The troopers’ quick and timely response led to the rescue, but this incident could have quickly become a tragedy due to the fact that none of the boat’s occupants were wearing personal flotation devices (life vests).

We would like remind everyone to make sure to have personal flotation devices for each person on board.

In June, members of the Office of Professional Standards spearheaded a food drive where they donated 928 pounds of food to the Mercer Street Friends Food Bank.

Although the food drive ended, several troopers along with members of the Troopers United Foundation Inc. continued to gather donations. The troopers worked with businesses and organizations across the State to gather 14 pallets of food and personal care items.

Despite the challenges this year, Mercer Street Friends has continued to provide meals to families in need and this donation will continue help to feed families in the area.